Conway and Kraeutler going to Brown and James Madison

Turn the page on hunger! Win an eReader at the Monmouth County Library 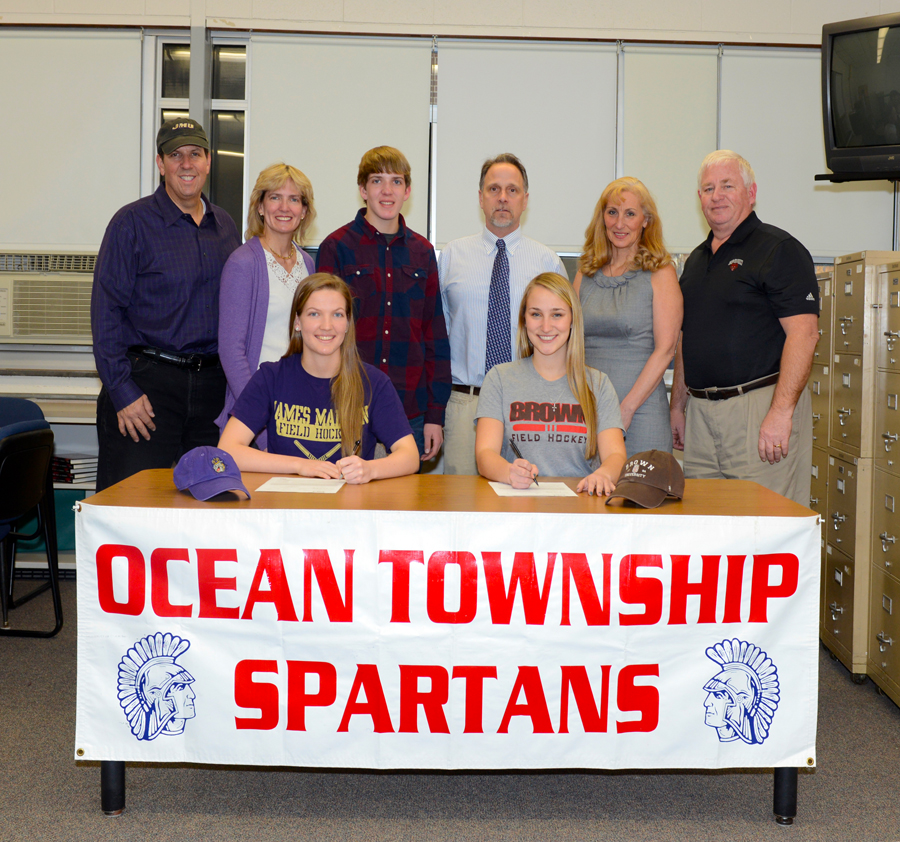 Sara Kraeutler on the left and Kelly Conway both signed letters to attended Division 1 schools in the fall to play field hockey. Behind Sara are her parents Thomas and Susan and brother Trevor. In the middle is Ocean Township High School athletic director H. Rusty Todd and Maryann and Chris Conway.

With the stroke of a pen years of hard work and countless of strokes on the grass and turf for one young lady and years of blocking those shots for another paid off. Two Ocean Township High School seniors, Kelly Conway and Sara Kraeutler, inked their college futures last week when they signed acceptance letters.

Conway was Captain of the 2014 varsity field hockey team at Ocean Township. She was a four year varsity letter winner for head coach D’Esposito. To finish out her senior year at Ocean she scored 14 goals and had 13 assists for 41 points. Her career total was 31 goals and 27 assists for 89 career points. 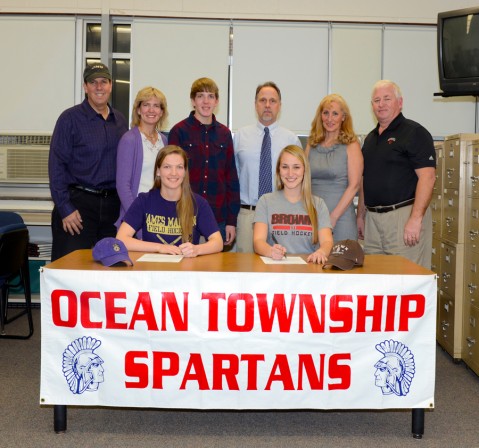 Sara Kraeutler on the left and Kelly Conway both signed letters to attended Division 1 schools in the fall to play field hockey. Behind Sara are her parents Thomas and Susan and brother Trevor. In the middle is Ocean Township High School athletic director H. Rusty Todd and Maryann and Chris Conway.

“I have been playing field hockey since I was ten years old,” said Conway. Her stats indicate that she is an offensive player, someone who loves to attack the goal. “I looked at about five schools, before I settled on Brown University. However, I’m not sure if I will be a striker or midfield player in the fall.”

It should be noted that Conway will be attending Brown University on an academic scholarship, and playing field hockey is secondary. She had two older sisters who played the sport, one; Erin, had a scholarship to Columbia as a goalie. “Right now I’m thinking about majoring in political science and economics,” added Conway.

Kraeutler made about a dozen visits to colleges and universities before she settled on James Madison in Virginia. “I actually committed to them last year when I was a junior,” said Kraeutler. “Since then they have had three different head coaches. But I’m still very excited to be a part of their program.”

It was during her sophomore year that she placed in the varsity goal. That season the team finished 9-9 and she had 28 saves, allowed six goals and had one shutout. As a junior she really started to shin as a goalkeeper. The Spartans finished 13-4-3; Kraeutler had 57 saves, four shutouts and was named to the All B-North Coaches Team.

Closing out her senior year, the Spartans went 15-5-1. In the goal she had 112 saves, seven shutouts and only allowed 15 goals all year. Kraeutler was named to the All B-North Coaches Team, First Team All-Shore, First Team All-Monmouth County and Second Team All-Group III.

When both girls were asked what their most memorable moment was as a Spartan, they turned toward each other and started mumbling like twin sisters. It was obvious that together they both had the same high memories as varsity Ocean field hockey players.

“It was this season against Hopewell Valley,” said Conway. She was talking about the NJSIAA state tournament. “They were ranked higher than us. But that game, we as a team played our best. I also had a breakaway goal to tie the game.”

For Kraeutler it was the same game. “I stopped four out of four strokes in double overtime stroke-off in the state semifinals,” said Kraeutler. With that win it was the first time in 12 years that the Spartans qualified for the state finals.

In the fall Conway will be a Bear at Brown and she hopes that she will get to keep number 8, which she has worn her entire career at Ocean Township. As for Kraeutler who will be on the Dukes squad at James Madison, she is hoping to wear number 21, after her favorite New York Yankee, Paul O’Neill the number she has worn as a Spartan.