Theater review: A View of the Mountains, an intense look at family and politics 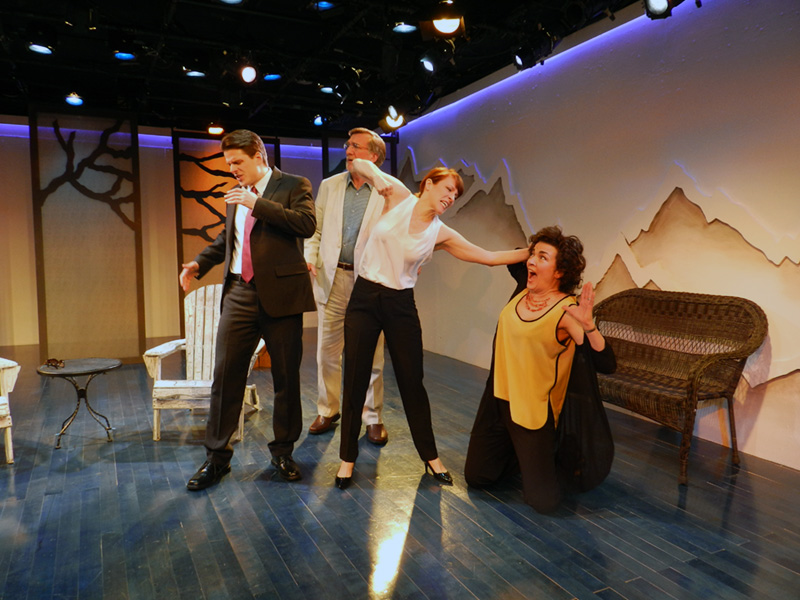 The reunion of an estranged father and son and their spouses does not go smoothly in “A View of the Mountains.” Shown, l-r, Michael Zlabinger, John Little, Katrina Ferguson and Eva Kaminsky.

By Madeline Schulman
A View of the Mountains, by Lee Blessing, is a sequel to his 1988 play A Walk in the Woods, which was nominated for both a Tony and a Pulitzer. A Walk in the Woods followed the arms limitations negotiations between American John Honeyman and Russian Andrei Botvinnik, and A View of the Mountains brings back John Honeyman (John Little) 30 years later. 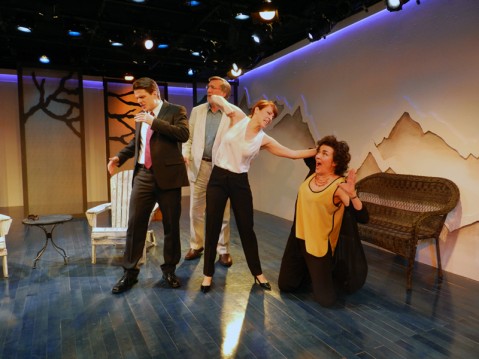 The reunion of an estranged father and son and their spouses does not go smoothly in “A View of the Mountains.” Shown, l-r, Michael Zlabinger, John Little, Katrina Ferguson and Eva Kaminsky.

John’s first marriage ended when his wife left him for a Tennessee Senator named Branch, whose last name John’s estranged son Will (Michael Zlabinger) has taken, and John is now married to Isla (Katrina Ferguson) and living on a pleasant estate on the Hudson River, with a beautiful view of the Catskills.    John and Isla are waiting for a visit from Will and his wife Gwynn (Eva Kaminsky), but we know it will not be pleasant. “Some sons hate their fathers,” Isla says. “You didn’t give Will his politics.”
Replies John, “He got them from Satan.”
John and Will have not seen each other for 30 years. John is a liberal, and Will, now occupying his stepfather’s seat as Junior Senator from Tennessee, is a right-wing Republican, soon to be picked as the nominee for Vice President at the Republican Convention.
Rubbing salt in the wound, he has partially made his reputation by insulting John Honeyman’s role in the Geneva arms limitation talks. Clearly, this family reunion will not be a loving one.
It starts badly when Gwynn sweeps the room for listening devices and complains that the beer might be drugged to put Will off his game, and gets worse when John starts putting pressure on Will to refuse the Vice Presidential nomination, serve out his Senatorial term, and quit political life.
How does John apply this pressure, and how do Will, Gwynn, and even Isla react? Those questions are at the core of the constantly interesting and gripping plot.
The acting is all so excellent that singling out one actor seems unfair, but the role of Gwynn is a great one, and Eva Kaminsky runs with it. Gwynn is paranoid, vicious and calculating, willing to use unpleasant information gleaned from the Internet to quell an enemy, and ready to resort to physical violence if necessary.
Isla compares Will and Gwynn to the Macbeths, and Gwynn has the Scottish Queen’s eye on the prize and willingness to do anything to achieve it. She is a fascinating monster.
In addition to the four adults, the cast includes Jon Erik Nielsen and Jared Rush alternating in the small but crucial role of John and Isla’s teenage son,  Andrey (the name is a tribute to John’s late Russian friend). We saw Jared Rush, who was sweetly natural in the part,
A View of the Mountains is a fascinating look at family and political life in the 21st century.
A View of the Mountains will be performed at NJ Rep, 179 Broadway, Long Branch through May 25, on Thursdays and Fridays, 8 p.m., Saturday 3 and 8 p.m., and Sundays, 2 p.m.
Tickets are $42 for adults. For tickets and more information, call 732-229-3166 or visit www.­njrep.org.