Schneider and team in another four years

VOTE. NO? Then don’t complain 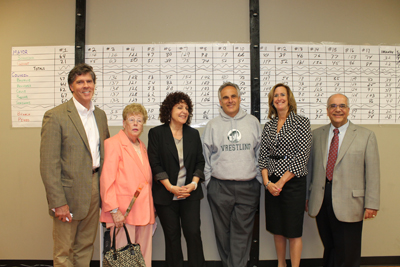 By Patty Booth O’Neill
Long Branch — The mayoral race was a lot closer than it has been in years. A lot closer than people thought it would be, except for the Schneider team. They felt it was a little too quiet on the streets leading up to the election and that a low turnout would not necessarily go in their favor.

But after the results were in it was Adam Schneider 1,461, and Avery Grant 1,213 with Adam winning with a little over 200 votes.

Declan O’Scanlon was tallying the votes as they came in by districts and after declaring Schneider the winner to a round of cheers, he told him, “You won by 10%.”

The turnout for this election compared to past elections was pitiful.

The amount of votes Schneider beat Brian Unger by four years ago was more than the total amount of people who turned out to vote in this election.

Schneider was gracious and short in his victory speech. “I’m looking forward to working with these five great people again,” he told the crowd. He said he knew people were going to be complacent because they thought he and his team were going to win. “And we did win,” he said. “I love this town, I love the people.” He then thanked his wife Pat and two daughters Amy and Emily for putting up with him during the campaign.

Top vote getter for the race for council seats was John Pallone with 1,793. “I’m very honored to be part of this team. I love working with them,” he said. “I’d like to thank the Mayor and Council for this opportunity. And the people of this town.”

After Pallone was Mary Jane Celli with 1,689 votes for her 6th term on council. “I’m delighted to be elected again,” Celli said. “I have a wonderful team to work with for another four years. It’s been delightful to have worked with Adam all these years.”

Coming in third was Joy Bastelli with 1,633 votes. “I’m ready to work hard for the next four years,” Bastelli said, and thanked the people of Long Branch. “Thank you so much for believing in me and our team.”

Next was Kate Billings at 1,615. “I look forward to working with Adam and this council. I especially want to thank all of our volunteers and residents for their support.”

Michael Sirianni who received 1,586 votes was very grateful. “I’m happy and thankful that the election is over,” he said. “I’m looking forward to the council meeting on Thursday for my second term.”