New York man busted for tying a child to a motorcycle 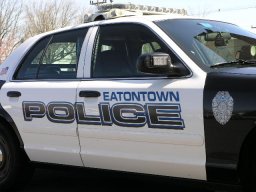 Eatontown – Officer Ryan Braswell was working a “Click It or Ticket” detail on May 31, when he observed a small child on the back of a motorcycle who appeared to be tied to the bike with twine, around 6:30 p.m.

Several other factors stood out immediately for Braswell; the twine appeared to be tied around the child’s feet and waist, and was blowing in the wind. The child was also wearing a helmet that was not the correct size, as it looked large.

The motorcycle was driving on Wychoff Road, and Braswell was turning his patrol vehicle around to make a motor vehicle stop, when the driver of the motor cycle pulled into the Quick Check parking lot. After securing the motorcycle, the operator went into the story and left the child bound to the bike.

Officer Braswell then walked up to the child, and noticed that his feet were tied with twine to the motorcycle foot pegs and the boy was tied with twine around his waist to the seat.

A woman in a pick-up truck that was parked in the Quick Check lot next to the motorcycle identified herself as the child’s mothers and was allowing him to ride on the back of the bike with her boyfriend to Perth Amboy, where he lives. She also said that she was following them in the truck.

Police have identified the driver of the motorcycle as Frank Albanese, 53, of Staten Island. Police have not identified the mother of the child, who was five years old. Braswell asked the parent to untie the boy from the bike, which took her about five minutes to undo all the knots.

Eatontown Police Detective Lawrence Tyler stated that he believed the twine was being used as a means to secure the boy to the motorcycle to keep him safe on the trip to Perth Amboy.

Once police ran a record check on Albanese it was discovered that he had an arrest warrant issued by Middlesex County Prosecutor’s Office on burglary, theft by unlawful taking and criminal mischief. Police also found out that Albanese was driving with a suspended license.

Eatontown Police took Albanese into custody and charged him with numerous motor vehicle violations. The helmets that were being worn by both Albanese and the child were not DOT approved by NJ Division of Motor Vehicles, so he was issued tickets for that as well.

Once Eatontown was done processing Albanese, he was turned over to the Middlesex Prosecutor’s Office. Besides the theft and burglary charges, Albanese was also charged with issuing seven bad checks.

The child, once removed from the motorcycle was turned over to his mother at the scene. Police were notifying Division of Child Protection and Permanency, who would investigate the parent and living conditions for the young boy.