‘Women of the Dream’ a dream come true

Pedestrian dies after being hit by a truck 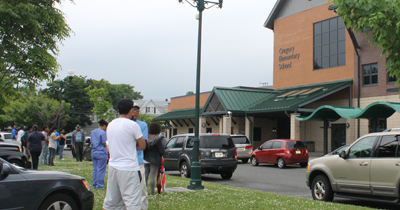 Concerned parents waited outside Gregory School for their child to be allowed to leave.

Neighbors reported that shots were fired Monday on Wilbur Ray Ave., a street off of Rockwell Ave, in Long Branch. Gregory School, located in the area, was immediately put on lockdown as parents waited outside for their child to be released and for news of the event.
Some parents at the rear door were allowed into the school at the discretion of Long Branch Police at the scene for their safety as that was the side where the shots were reported being fired.

The area around the school was soon declared safe by police and students were allowed to go home.

Meanwhile on the other side of town Police were in pursuit of a dark colored sedan believed to driven by the shooter. The car was stopped and surrounded by police on Westwood Ave near Bath. After a lengthy search and questioning no weapons were found. The occupants of the car were released at the scene.

“The man who was shot at had nothing to say about the incident and in no way was helpful to police,” Long Branch Public Safety Director Jason Roebuck told The LINK News. “We didn’t find any weapons in the car we stopped, and no arrests were made.”

A dark green sedan was stopped on Westwood Ave., containing men believed to be the shooters.

Concerned parents waited outside Gregory School for their child to be allowed to leave.