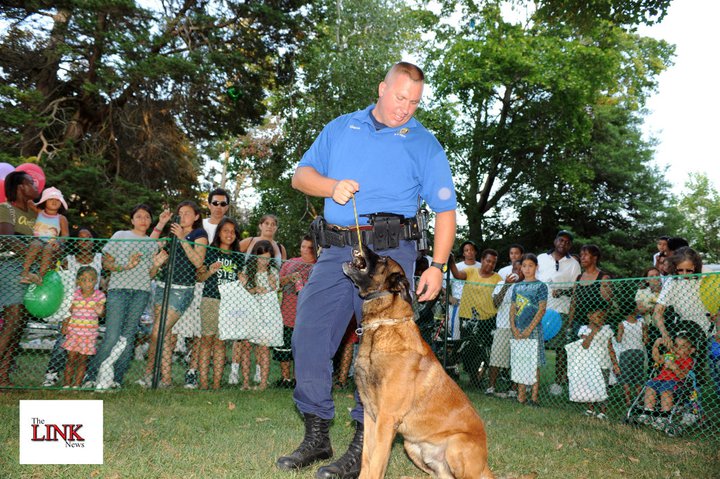 Retired LBPD K-9 Officer Fred Cistaro and his partner Doyan, who passed away on June 16, 2014.

It is with great sadness that I announce the passing of the partner of Fred Cistaro, K-9 Doyan. K-9 Doyan passed away at 0830 this morning, 06-16-2014 at the Red Bank Animal Hospital. K-9 Doyan’s health had severely deteriorated over night and was diagnosed this morning with a brain tumor that had created an advanced neurological condition that made him unresponsive. Fred was at K-9 Doyan’s side at the time of his passing to watch his last breaths. As their partnership had always been, with K-9 Doyan being loyally at Fred side. Fred had the opportunity to return the favor this last time for the countless times K-9 Doyan had been there for him.

K-9 Doyan was very active and enjoying his retirement with his family when he fell ill 24 hours ago.

Retired LBPD K-9 Officer Fred Cistaro and his partner Doyan, who passed away on June 16, 2014.

K-9 Doyan Von Doverfjeld was born on 01-17-2004 and arrived to me via Newark Airport in April 2004. K-9 Doyan came out of his crate full of energy and ready to take on the world. I raised K-9 Doyan along with his half-brother K-9 Danyo who is my current partner. It was an interesting and irreplaceable time in my life taking on the raising of two Malinois puppies while still working an active K-9.

The sleepless nights of crate training with the 4:00 am bathroom breaks in the rain where all you want them to do is go to the bathroom, all the while they thought it was play time. The never ending jumping with paw prints on whoever’s clothing they believed to be just a little too clean or using any available pant leg as bite sleeves. Or while looking for one of my shoes, only to find they had claimed it and believed it to be their new toy while playing keep away whenever it seemed I was short on time.

K-9 Doyan was initially my favorite and my first choice to replace my first partner, K-9 Zeus. This however was not to be and as life changes and alters course, fate takes over. I eventually ended up working with K-9 Danyo and attended the Atlantic City Canine Academy in January 2005.

I was three weeks into the Atlantic City Canine Academy when Bill Richards who was the Public Safety Director at the time advised me that the city wanted to expand the Canine Unit. Bill Richards inquired if P.O. Cistaro could join the class three weeks into the course and if we could attain a dog with this short of notice. As fate has it, P.O. Cistaro and K-9 Doyan were accepted into week four of the class and it was the perfect fit. Working a Police Canine is the most rewarding assignment in our field, and at times the most difficult. All the while, you’re usually spending more time with your K-9 partner then you’re spending with your family, it’s a bond like no other.

Numerous beginner handlers have relayed to me, how something that appears to be so easy is the most difficult thing they ever attempted. Usually with the dogs carrying the brunt or most of the load, all the while picking up the slack for their handlers. As with one trainer telling P.O. Cistaro during the early stages of training, “Get a pulse ‘cause you’re putting me and the bleepin’ dog to sleep!”
Within three weeks, not had they just caught up to the class, P.O. Cistaro and K-9 Doyan had surpassed the class and were excelling. P.O. Cistaro and K-9 Doyan graduated Patrol School in Atlantic City Canine Academy on May 6, 2005. The fall of 2005 they qualified and competed at the Nationals Patrol Dog Competition in Evansville Indiana, while placing 17th which was phenomenal for a new K-9 team. In the fall they attended a scent class hosted by the Port Authority of New York & New Jersey Police where they certified for narcotics.

During their Partnership, they had numerous successful Apprehensions, Surrenders, Tracks, and Narcotics finds. All the while performing countless K-9 Demonstrations for the end of school year Fun Days along with the yearly National Night Out.