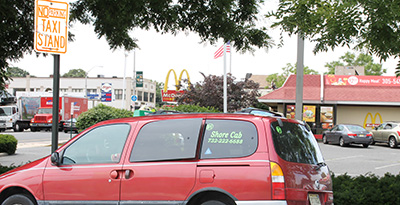 Taxi owners in Long Branch say that having a stationary stand, like this one next to McDonalds, allows riders to know where to get a taxi.

By Neil Schulman
Long Branch — While the city is losing its taxi stands, Public Safety Director Jason Roebuck says they’ll be replaced by “drop off points” which function essentially the same way.

Taxi owners in Long Branch say that having a stationary stand, like this one next to McDonalds, allows riders to know where to get a taxi.

Taxi owners have complained about various parts of the ordinance. They have argued that those stands let customers know where to go, and give drivers a place to seek fares. They also provided a location for those who don’t speak English well, or don’t have a phone, to find a cab. Eliminating them could make it harder to do business, they argued.

At the July 8 City Council workshop, Roebuck said there is only one taxi company in Long Branch, which is paying a small fee for parking spaces by the stand. If the new licenses were sold to a different company, the situation could get complicated, he said.

“He’s not going to pay for those three spots and let other people park there,” he said.

Drop off points will function exactly the same way, but would be open to any company that had licenses in the city, Roebuck said.
Cabs would be able to sit there waiting for fares, just like at the stands.

City Attorney James Aaron said this is essentially the system used in most major cities in areas where taxis congregate.
“You’ll see here exactly what you see outside the Port Authority in New York,” Aaron said.

While the exact locations of the drop off points are still being determined, Roebuck said they planned to put ones where the current stands are, by Broadway and Third Avenue and the train station. They are also considering sites by the Ocean Place hotel, Pier Village, West End, and Monmouth Medical Center.

Councilwoman Dr. Mary Jane Celli, who was absent when the ordinance was passed, said she had numerous concerns about it, including this.

“When I realized you were going to take away the taxi stand, I didn’t like it at all,” she said. However, she says that she is willing to wait before asking for any changes.

“I’ll give you six months. Then let’s come back and revisit it,” Celli said.