Funeral arrangements are set for Colbert and Roach 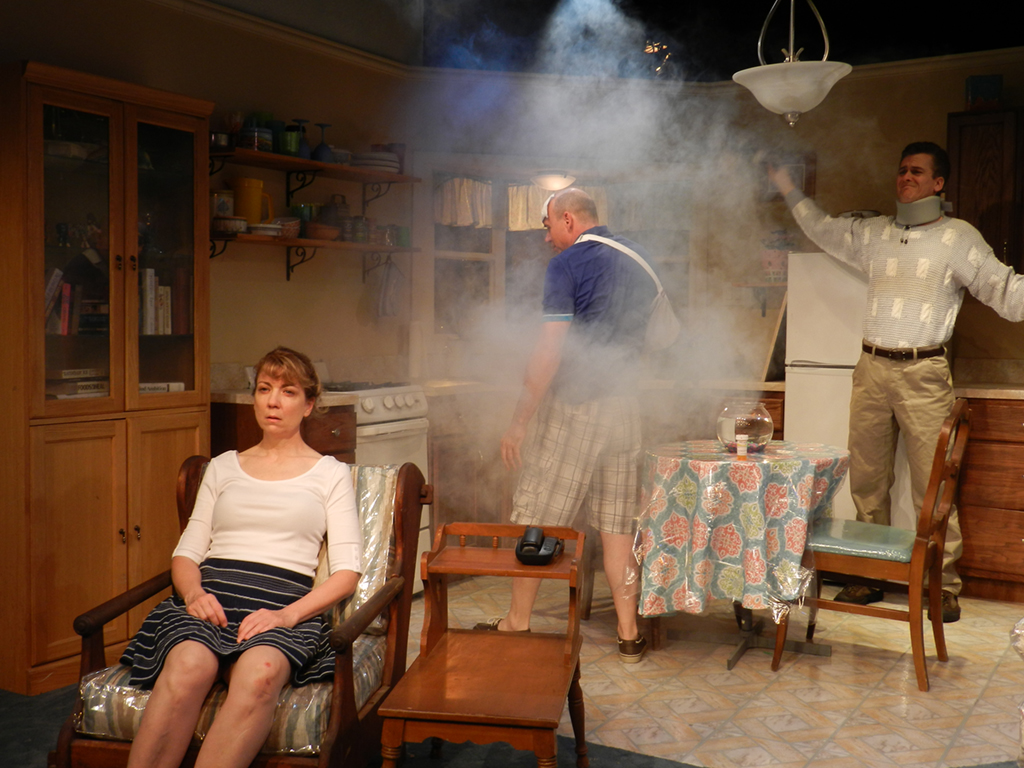 By Madeline Schulman
Lucky Me, now playing at the New Jersey Repertory Theater in Long Branch, is the story of a comic modern female Job, or (for those who remember L’il Abner), Joe Btfsplk (sorry, spell checker!).
Poor Sara Fine (Wendy Peace)! Light bulbs burn out minutes after she replaces them, mysterious leaks move around her ceiling, her goldfish keep expiring (I have been assured that no goldfish were harmed in the making of this play), and kitchen fires have prevented her from enjoying a hot meal since the fall of the Berlin Wall. 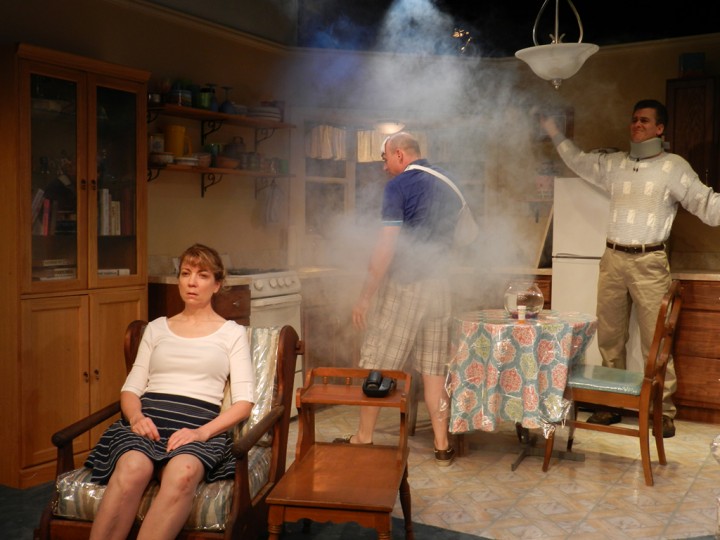 Making comedy out of Sara’s troubles takes some comic brilliance, and playwright Robert Caisley accomplishes this.

When we meet Sara, she is being helped up the steps to her second story apartment in Denver, Colorado, by Tom (Michael Irvin Pollard), her neighbor, a TSA agent from across the street. She has been in the emergency room to tend to her foot, broken when she fell off the roof (not for the first time in her life).

Soon they are joined by Sara’s father Leo, a blind, cantankerous, possessive but slyly humorous man, possibly suffering from dementia, who as played by Dan Grimaldi is at once charming and infuriating, magnetic and repellant.

Yuri (Mark Light-Orr), Sara’s sympathetic Ukrainian landlord, has Leo’s number, which is three. Divide what Leo says by three, Yuri advises. One third is true, one third Leo doesn’t remember, and one third is bull.

In spite of the dangers of courting Sara, whose friends and suitors end up in neck braces and arm slings, Tom is soon in love with her, and attempts to win her with adorable awkwardness, showing off his salsa moves and trying to persuade her that they had a special moment as they both reached for the Parmesan cheese. His courtship is hindered by her ludicrous run of bad luck and Leo’s antipathy.

As played by Wendy Peace and Michael Irvin Pollard, Sara is so attractive and Tom so winning that we root for them. Wendy Peace also shows a knack for physical comedy, whether groping for crutches just out of her reach or holding a bagged goldfish in her teeth.

There are some nifty special effects, graphically showing light bulbs sizzling out, water dripping, and other artfully staged disasters.
The set design (Jessica Parks) is effective, and the acting and direction (SuzAnne Barabas) are great.
One tiny quibble: although there are only 4 units in Sara’s building, there is an ominous 13 on her door. Maybe she should change it to lucky 7 – but that might shorten the very funny play!