Historian talks about change, both good and bad 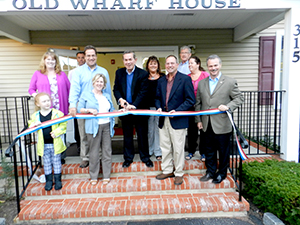 Oceanport Borough Administrator John Bennett cuts the ribbon to officially declare the Old Wharf House Oceanport’s new temporary Borough Hall, as borough officials, staff and their family members look on. The former building on Monmouth Boulevard is no longer usable due to structural damage.  Mayor Michael Mahon (right) said he asked Bennett to cut this ribbon because he’s been the guiding force behind finding new places for facilities there, moving the library to the Community Center and the police department to the Fort Monmouth Firehouse. “He is the leading force in getting this done, here the firehouse, the library,” Mahon said. “John has had the lead on it.” The mayor added all the borough’s employees have been helpful in making the transitions.