Random Thought – My most memorable Christmas 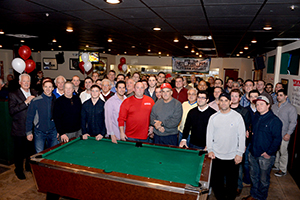 By Walter J. O’Neill, Jr
Ocean Township — Honor, tradition, brotherhood and identity-building was the theme on Saturday night as the 1st Big Red Alumni Social Fundraiser was held at Otto’s Bar and Grill. The evening was hosted by the current head football coach at Ocean Township High School Don Klein.

The Spartan football program started in 1966 at Ocean Township High School. The first head coach was Al Brown, who was there one season and had a 3-6 record. Jack Tighe then followed and coached for eight years. “He had success here during his tenure,” said Klein.

The third head coach was Carmen Magnotta, fourth was Willie Trimmer. “Coach (George) Conti followed Trimmer and was here for 11 years. He is known as the father of our program today,” said Klein.
Conti was at the banquet, and that is a testament to the man’s love of the sport, school and his former players.
“As many of you know, three weeks ago I had a triple bypass, so I’m here tonight for just a short time,” said Conti.

He was reflective on his career as head coach in Ocean. He stated that the first time he went to the high school was to swap games films, as he was coaching at Asbury Park High School.

“I remember pulling up to the back of the school and noticed that everyone was smoking — students, staff, coaches. Then I noticed that some kids had varsity jackets with a red body and blue sleeves, some had white sleeves, there was no uniformity,” said Conti. But it was not long after that day he arrived as the fifth head coach in the school’s history.

“One of the first things I wanted to do was bring in an identity to the team. I picked red as our major color and we became known as the Big Red 1,” added Conti. He did receive some push back from old-timers, saying they had a color. “My answer was, show me what color this school is. From that point on we were red.”

“I look back at some of my methods and to be honest with you I question some of the things I felt that I had to do. Remembering I was the son of a guy who was a football coach for 50 years, and was the only one of 13 children born in this country, so you know how I was raised,” said Conti.

He added that he was coached by coaches who basically took no prisoners. “Looking back, I wish I could redo some of the things I did. But one thing that we started still remains today, and that is the traditions.”

He said it all started with 10 jumping jacks no matter if you win or lose. He then mentioned “Star Time,” “Hog Dinners,” “Chinese Fire Drill,” “Night of the Long Knives,” “Beach Practice,” and “Bula Bula.”

“I want to say this the program was built on tradition and I have to congratulate the coaches that followed me for continuing to keep building on those traditions,” said Conti.

Conti finished his speech saying that he admired all the former players in the room. He stated that he designed the program so that when adversity hit, as he known it would, nobody goes unscathed.

“We all have to practice what we preach along the way. My intention was to make this program so difficult that when you finished here you could deal with anything.”

Conti had great success on the field as he finished with an 86-23 record and eight playoff appearances in 11 years. However, when asked what his greatest team was many think he would say the 1993 undefeated squad, but they would be wrong.

Following Conti as coach was Mike Lambusta for three years, who is now the school’s Vice Principal, then Dan George for two years, Jeff Weiner for one year, Scott Larkin for a three-year stint, Sal Spampanato coached four years and then Klein, who is in his eighth year.

“We know times are tough and school budgets are getting tighter and tighter. We have our booster club, but we also need help in the coaching and technology area. That is why we are having this first annual alumni dinner,” said Klein.