By Walter J. O’Neill, Jr
Long Branch — The Vincent J. Borelli Auditorium at the Long Branch High School has been home to many outstanding performances. However, on January 23, the show went to the dogs, as the Long Branch Police Department held a graduation ceremony for Canine Basic Patrol School, the second such class they have certified.

“About 17 years ago I was in a similar situation as these officers are today, I was graduating with my K-9 partner Quando, a 14-month-old Dutch Sheppard,” said Wiener. He added that the K-9 training he endured was some of the hardest and most intense training he has had in his career. “The bond that develops between a handler and his K-9 partner is so strong that he will give his life to protect yours.”

Wiener then went on to describe how important a K-9 unit is to a community. He said that sometimes relations with the residents can be strained, but a K-9 is a great tool for building respect and developing a line of communication with a community.

“It allows an officer to reach out and connect with people they normally could not connect with without a K-9 partner. It allows the officer to be more approachable and to develop and foster a connection with the community. Having the mere presence of a K-9 at an incident can quickly deescalate the tension,” said Wiener.

It took some arm bending and convincing, according to Wiener, to have Director Roebuck approve the training class and allow Sergeant Robert Shamrock to instruct.

Canine Basic Patrol School is a four-month program, and it is just as hard on the handler as it is on the dogs. Shamrock was not only the instructor, he was also breaking in his third K-9 partner in 15 years. 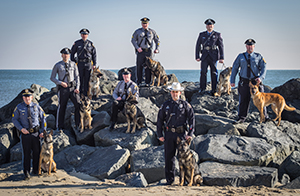 “Sergeant Shamrock has volunteered his time and went on to get his instructors certificate. That is no easy task, and we are extremely proud of him and know that his training classes are of the highest quality,” said Wiener.