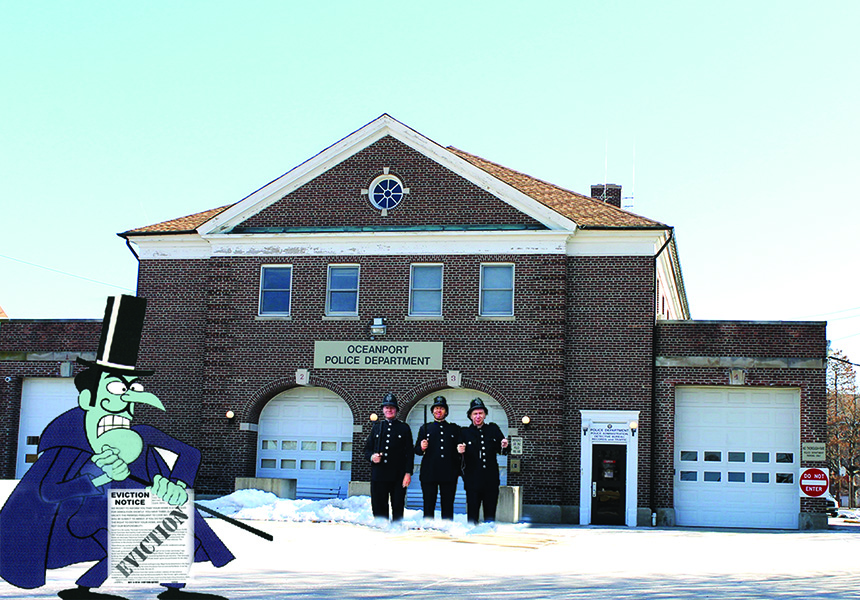 This is not quite how it happened, but was the reaction of many to the news that Oceanport Police were told they faced the threat of eviction from Fort Monmouth after a seemingly amiable period where they put $100,000 to fix up the fort’s old Fire Department as their new headquarters.­

Oceanport — “I need that lease signed today. Otherwise, by 10 a.m. tomorrow, I will deliver the eviction letter to the chief. Thanks to your council, we are out of time,” wrote Bruce Steadman, executive director of FMERA (Ft. Monmouth Economic Revitalization Authority), to John Bennett the Oceanport Business Administrator. 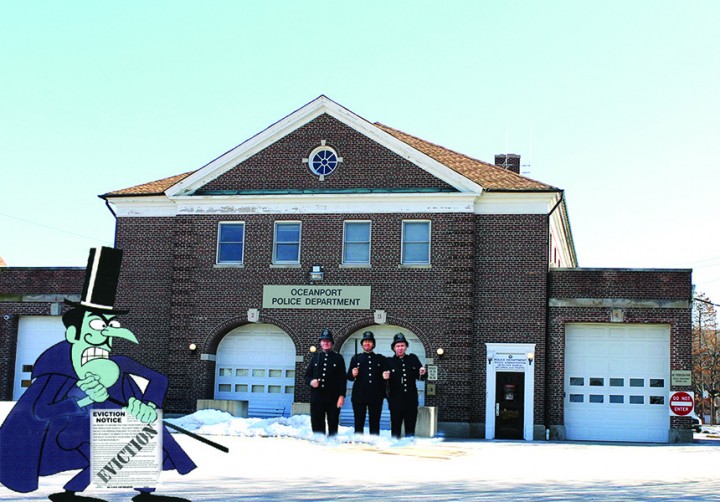 This is not quite how it happened, but was the reaction of many to the news that Oceanport Police were told they faced the threat of eviction from Fort Monmouth after a seemingly amiable period where they put $100,000 to fix up the fort’s old Fire Department as their new headquarters.­

“Can you believe what he wrote? It was kind of like putting a gun to your head and saying take it or leave it,” said Joe Irace, Oceanport councilman.

Oceanport Police are currently housed in the former Fort Monmouth Fire House on the main post. The borough spent over $100,000 last summer to get the facility ready for the police officers to move in.

Their former headquarters, in the Borough Hall building on Monmouth Blvd, was destroyed by Superstorm Sandy in 2012. Up until last summer the police officers were working out of trailers.

FMERA is the group that oversees the redevelopment of Fort Monmouth, which closed in September 2011. Last summer the borough had worked out an agreement with FMERA to acquire the fire house for $1 and they would be given an 18 month lease.

The lease also included a provision that if environmental issues were discovered, the borough would be responsible to clean it up. The borough had some issues with that clause, and thought they had negotiated a change to it. (See related article of discussions of FMERA at last Thursday’s council meeting.)

What went wrong to get Steadman fired up?

Some Oceanport officials we spoke to believed that it was a matter of retribution.

According to sources, FMERA was hoping to get a housing project by developer RPM going inside the east gate of the property, which would have the former officers’ quarters sold at 100 percent of market value. Another section of that plan had 48 units on the South Post rented, and 24 of those would be low income housing.

Though the land is in its borders, Oceanport would not receive taxes on that property. They would get a PILOT, Payment In Lieu Of Taxes, which is often much less than what would be collected in tax revenue.

The agreement for the RPM project had FMERA selling Oceanport two plots of land at below the market rate, that would be used for a new borough municipality building and a school. It also included one building that could be used for public works.

At the January 15 Borough Council Meeting, the governing body was asked to take action on the RPM housing project. The Link was told that after discussing the issue in closed session, the council decided that they would take no action on the housing project at that time.

The following day, a Friday, Bennett informed Steadman that the council had not approved or declined the project at this time.

Monday was the Dr. Martin Luther King holiday and the borough offices were closed. The next day Oceanport received the email from Steadman threatening eviction.

When you look at the details, sources in Oceanport say it appears that FMERA was retaliating for not getting the housing project going.

When officials started to discuss the lease for the police department, they were told FMERA had made adjustments. The land sale and public works building was apparently considered dependent on approving the housing development, and were no longer on the table. FMERA also insisted on enforcing the original environmental cleanup rules.

The lease is good for a one-year term, but is backdated to when police moved in, so expires in October. It could be extended for six months afterward – if both sides consent.

“There is asbestos in the basement, and our officers were told not to drink the water. What is in the water that they can drink and what other issues might be there?” said Irace. He also added that the clean-up cost could run from $5 to $5 million. “Why should we sign a lease where we are held responsible for those environmental cost when we only have the building for six (more) months?”

Oceanport residents are questioning why FMERA would threaten such action. They knew the police had moved in to the fire house and already spent $100,000 to get it usable. All that work was done before a lease was signed, as the FMERA board knew that the police needed a space and more likely would be there until they found a new building.

Questions have been raised if Steadman has the authority to start an eviction without the rest of the FMERA board’s approval. “What judge would evict a police department and jeopardize public safety?” one resident asked.