O’Neills, AKA students to be inducted into National Karate Hall of Fame

Future chefs in grades three to five from the Township of Ocean School District along with High School and Sodexo volunteers and Cory Goldfarb, general manager of Sodexo for Ocean, gather for a photo on Saturday.

By Walter J. O’Neill, Jr
Ocean Township — The winning healthy snack was a fresh and fruity dip with pita chips. It was created by Carli Colfer, a fifth-grade student from the Ocean Township Intermediate School.

Future chefs in grades three to five from the Township of Ocean School District along with High School and Sodexo volunteers and Cory Goldfarb, general manager of Sodexo for Ocean, gather for a photo on Saturday. 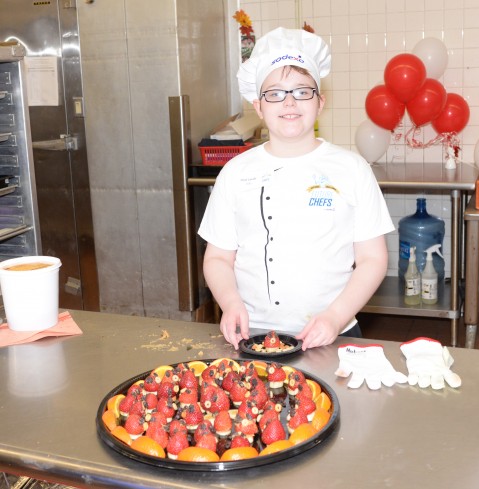 One of the finalists was Jacob Bazer, fifth grader from the Intermediate School with his “Mr. Berry” snack.

Out of 230 students in the township, Colfer and her dip won the Sodexo Healthy After-School Snack Competition, which is part of the 2015 Future Chefs Challenge. Cory Goldfarb, general manager of Sodexo for the Ocean Township School District, was excited about this year’s event.

“This is my third year organizing this event here in the township. The first year we had the students create healthy salads, last year was healthy sandwiches and this year we went with an after-school snack theme,” said Goldfarb.

According to Goldfarb, one of the key ingredients is that students should be able to make the snacks on their own.

“The concept is that students could make the snack after school without supervision from their parents,” Goldfarb said. “We asked the students to use their creativity and culinary skills to make healthy snacks.”

Students in grade three to five participated in the competition. All were asked to submit recipes and names for their snack and the top 10 in the district were selected by Goldfarb and his staff to participate in the cook off final on March 7, at the Intermediate School. 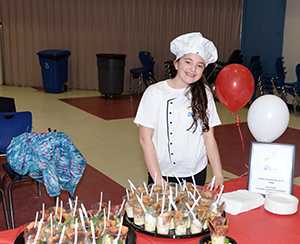 The winner was Carli Colfer with her fresh and fruity dip with pita chips.

Chrissy Decker, Helen Kallok, Casey Klohr, Candice Mattia, Fatima Zaqvi, Cass Reng, and Rachel Xenaiks are students from the FCCLA (Family, Career and Community Leaders of America) program at the Ocean Township High School who volunteered to help the future chefs. Goldfarb also had some of his staff volunteer on Saturday. Liz Alioto, Rose Tiffany Mcvey, Debbie Blackton, Tara Baskin and Marlene Miranda came in on their day off to help the young chefs.

The judges were looking for originality, taste, ease of presentation, kid friendliness and use of healthy ingredients.

As the winner Colfer will now represent the Township of Ocean in the regional competition. Regional finalists will then vie to become one of five national finalists competing for the public’s vote on a special Future Chefs TouTube channel.

All of the students in the Ocean Township finals received a lunch box filled with various kid-friendly items, a medal, Sodexo attire, and medals. Colfer was given a large colander filled with kid-sized cooking utensils, a kids cook book and a FitBit activity tracker.