Is this the next Oceanport borough hall? 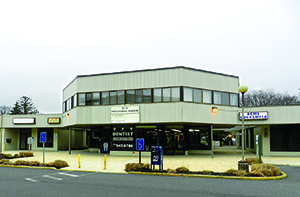 If Oceanport officials choose to purchase site, they would occupy or rebuild the middle structure. The other stores would remain.

By Neil Schulman
Oceanport — The borough will hold a Town Hall meeting on April 21 to discuss several possible locations for a new borough hall, and whether the facilities should include the police department and library. Each of the five locations being considered has its own pros and cons.
The cost for most of the facilities would be between $5 million to $10 million, though FEMA is expected to reimburse Oceanport for much of the expense.

In October 2012, Superstorm Sandy not only flooded the Monmouth Boulevard building, rendering it unusable for several weeks, but caused structural damage. Borough offices are currently operating out of the Old Wharf House; the police from the former Fort Monmouth Fire Department; and the library at the Oceanport Community Center.
At the April 2 Borough Council meeting, Borough Architect Andrew Torchia said that they have been reviewing five possible sites for building a new borough hall. They include:
• Creating a more flood-proofed building at the Monmouth Boulevard location.
• Building a structure next to Maria Gatta Park.
• Purchasing the (Teicher) plaza on East Main Street, and using the middle structure for the Borough Hall.
• Building a new facility on a vacant part of Main Street on Fort Monmouth.
• Acquiring Russel Hall at Fort Monmouth, currently out for bid.

The review process
Torchia reviewed all but the Russel Hall proposal for council, as that is an existing building with different issues.
Torchia said that his firm and the council’s Site Selection Committee first determined how much space was needed, and how it could be configured to meet the needs of Oceanport and the community.

A total of 22,500 square feet is required, with the library and police department. Some of the properties would require a two- or three-story building for that due to limited footprints.

They also looked at saving space by having part-time positions share offices.

Following that, they looked at the reasons to consider each location.

“With the selection committee, we also went through the pros and cons of each property,” Torchia said.

For example, the pros of the Maria Gatta Park site include a central location, easy to get to from all of Oceanport. It would also allow the borough to work easily on recreation-related programs. However, since the site is on Green Acres property, Oceanport would need to find land to swap for it. It might also suffer traffic problems when Monmouth Park Racetrack is open.
Torchia said buying the plaza could be an opportunity to spur new development and businesses to the borough, could bring in more revenue from rental (from the existing businesses such as the pharmacy, convenience store, bank, etc.) than it currently does in taxes and it might be less expensive to renovate an existing structure than build a new one. On the other hand, it would cost money to acquire the property, there could be parking issues, the entrance and exits aren’t ideal for the police department, and “you would be in the landlord business,” Torchia noted.

The Monmouth Boulevard structure could be rebuilt to be flood-proof. Oceanport already owns the land, and everyone in the borough knows where it is. However, the parking lot would still get inundated by heavy rain.

“If another flood comes, you’re not going to get to it,” Torchia said.

That might be less of a problem if the police department doesn’t move back, since then there wouldn’t be any inaccessible emergency services.

Police, library and costs
There are advantages to having the police department as part of the existing structure, allowing the police officers to easily coordinate with governing officials and other employees. However, it would come at a cost: space for a fully furnished police department is about $450 per square foot, compared to $300-400 for the rest of the facility.

That means that the average cost with a police department for a new building would be $10 million, whereas a smaller structure without it could cost $5-7 million, Torchia said.

Not including the library would save square footage, but it does not require excessive equipment.

While many people are happy with the current location, Councilwoman Ellynn Kahle said  she has been told by library officials that they feel isolated where they currently are.

Still, the Selection Committee is recommending not including either department in the new borough hall.

Russel Hall
At the council meeting, officials introduced a $1.2 million bond to allow it to go out to bid on the building.

If Oceanport officials choose to purchase site, they would occupy or rebuild the middle structure. The other stores would remain.

, has issued Requests For Offers To Purchase the property, due April 13.

Mayor Michael Mahon said that the borough must assure funds are available, which this bond ordinance will do.

The mayor said that this was preliminary work to satisfy FMERA that Oceanport was taking the process seriously.

“We have to introduce — only introduce — a bond ordinance showing funds are available,” Mahon said. “This is not our bid amount. This is just an all in number,” he said. He added that if Oceanport is successful, it expects to be reimbursed by FEMA for the costs.

Russel Hall has 40,000 square feet of space, though 10,000 is in a basement with undersized ceilings and might not be usable. The other 30,000 is spread over three stories.

Public hearing
Due to the complexity of the project, Oceanport is seeking public input. A town hall meeting will be held April 21 at Maple Place School to discuss the projects with the public in more detail.