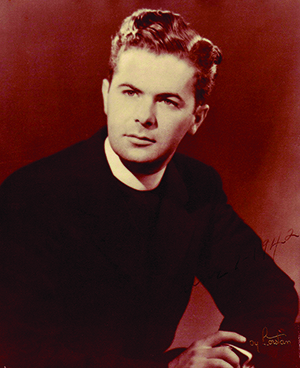 Monsignor Bradley as a young man in 1942.

By Walter J. O’Neill, Jr
For decades his name was a fixture on the lips of Catholics and non-Catholics in our area. Monsignor Paul Bradley was Pastor of St. Michael’s Church in West End from 1969-1989.

Monsignor Bradley as a young man in 1942.

I was one of the very fortunate people to have known Monsignor Bradley outside of the church setting. We often spoke about his devotion not only to God, but to the country he loved and served.

During World War II, Father Bradley served as a regimental chaplain of the 28th Marines, 5th Marine division. It was the group that raised the immortal flag on Mount Suribachi in Iwo Jima.

When those Marines were raising the flag, Father Bradley was at the bottom of that hill holding Mass for servicemen. “Padre” as he was called by the men in his regiment, was awarded the Bronze Star for outstanding bravery and valor, and the Purple Heart for a wound caused by mortar fragments.

I asked Monsignor Bradley once if he found any conflict in being a priest and fighting in a war zone. He smiled at me and said, “I am not a conscientious objector, and I will protect the country and do God’s work.”
His military career spanned 27 years, and included tours in Korea and Vietnam. He was awarded many medals and citations over the nearly three decades in the Navy.

On July 10, 2005 Monsignor Bradley passed away. However, he left a legacy that will be remembered forever, thanks to Larry R. Cappetto. Cappetto is a documentary filmmaker who created the award-winning documentary series “Lest They Be Forgotten” He has appeared on CBS Evening News, Fox Television, and other major networks.

Cappetto has earned the title “military historian” and gained the respect of the United States Armed Forces. He was the recipient of the prestigious George Washington Honor of Medal given by the Freedom’s Foundation.

“I’ve never met a priest like Father Bradley before. He was a one-of-a-kind. He truly brought joy into my life and I was proud to call him my friend,” said Cappetto. He added that during his military career, Father Bradley delivered many inspiring sermons, which drew men of all ranks and faiths to his services.

“His charismatic presence, devotion to duty and faith improved the moral and spiritual well-being of all personnel, regardless of rank, race or creed.”

Monsignor Bradley had a stellar military career, but his influence extended far beyond those years. He reached countless of thousands of parishioners and those he visited were often in hospitals. As one man once said, “You were never the same after being in his presence.”

“Over the years as a pastor he brought many back to the fold who had gone astray, while strengthening and inspiring those of faith,” said Cappetto. “A humble servant, anointed and called of God, revered by his peers, a Marine’s Marine.”

The premiere of Cappetto’s latest documentary, “Fr. Bradley Remembered – A Journey of Faith,” will be held in Long Branch on Friday, July 10, at 6:00 p.m. in the auditorium of the Long Branch Middle School.

“There is no admission fee and this event is open to the public,” said Cappetto. “I would like to thank Dr. Michael Salvatore, Superintendent of Schools, and the Board of Education members for allowing the debut of this film in the city that Monsignor Bradley loved.”

In the words of Monsignor Bradley, “Keep your eye on the ball, feet in the stirrups, hand on the plow, nose to the grindstone, shoulder to the wheel, ear to the ground and to view the present situation with such alarm that you will pray daily, attend mass every Sunday, receive Holy Communion frequently and write home every week.”