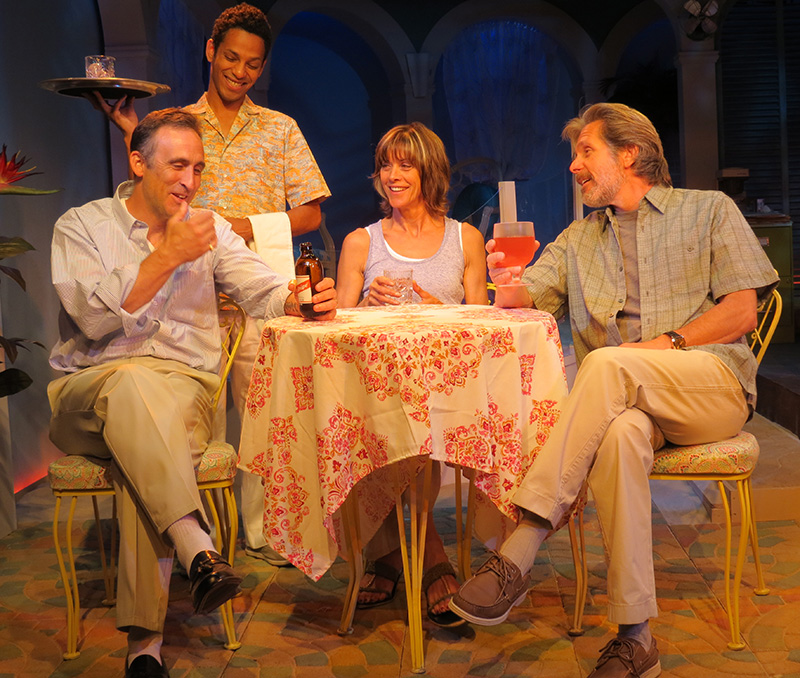 Long Branch — Opening night of the world premiere of Closure, by Richard Dresser, at New Jersey Rep was a dreary, rainy evening at the Jersey Shore, but inside the theater the audience was transported to various locations on a sunny, pretty Caribbean island (design by Jessica Parks), including a cafe, a hotel room, and (more ominously) the police station. 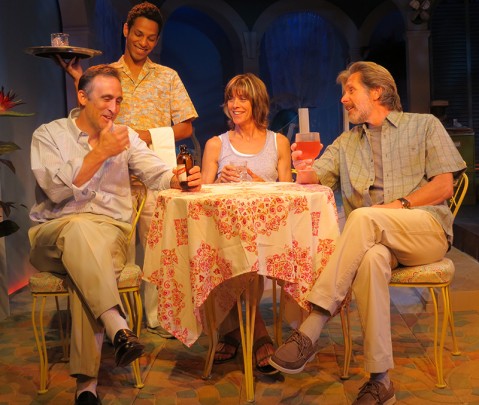 Jane (Wendie Malick) and Detective Ray Hadley (Gary Cole) open the play drinking at a cafe table. Jane has a week off from her job as a fifth grade teacher, but she is not here for pleasure. Three months ago, her teenage daughter vanished while on a school trip (reminiscent of the disappearance of Natalee Holloway in Aruba 10 years ago), and she is on her fifth visit since the disappearance to find out what progress the policeman has made in solving the case.

He is evasive; he has a “person of interest” but he will not say who it is, although he hints it may even be their waiter, Ken (Biniam Tekola). Ken, with his youthful attractiveness and charming British accent, seems an unlikely suspect, but there are only four characters to deal with.

The fourth is Jane’s businessman husband, Peter (Victor Verhaege), who seems less committed to the investigation than Jane. Perhaps he is more ready to give up searching and try to go on with their lives. He sets up an office in the hotel room with his computer and phone and fills the uncomfortable silence with chatter about his hateful boss.

Their daughter’s disappearance has put a strain on their marriage, and the situation is not improved by the perceived attraction between Jane and Ray. Why has she made so many trips to the island? Why does Ray seem to be dragging out the investigation? Is it in order to spend more time with Jane?

With such powerfully charismatic and good-looking actors as Wendie Malick (whose TV work includes Hot In Cleveland) and Gary Cole (star of HBO’s VEEP), the mutual magnetism is evident.

Another intriguing duo is Ray and Ken, where the older, White policeman has all the power over a young Black waiter living on tips.

That is all that can be written without giving away the many plot turns, as the spotlight of doubt shines on one man after another and more and more secrets and lies are revealed. Jane longs for closure, but will finding her daughter’s fate heal the hurt in her heart or make it permanent? Closure is an intriguing mystery, with a core story to touch any parent.

Closure is playing at NJ Rep, 179 Broadway, Long Branch, through July 19, with regular performances Thursdays and Fridays at 8 p.m.; Saturdays at 3 and 8 p.m.; and Sundays at 2 and 7 p.m.