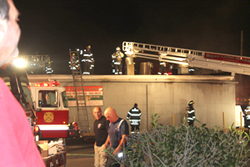 Firemen work on the roof of the building.

An alarm was called into the Oceanport Firehouse around 9:oo on Friday evening to report a fire in the mall housing three stores on Main Street owned by Mrs. Teicher. The fire reportedly started in Enzo’s Deli at 281 Main St. Also in that mall are Oceanport Post Office and Just Hair and Nails, owned by Justine Talarico.

Firetrucks from surrounding towns were situated around the smoldering building. Firefighters were working on the roof, cutting ventilation holes, checking for hot spots, hosing down the roof. Firefighters and other personnel from Little Silver, Long Branch, Middletown, West Long Branch, and Sea Bright were at the scene providing plenty of backup.

The Blue Moon was still low in the sky as firemen fought the blaze that seemed to be concentrated at the rear of Enzo’a Deli. Inside the little mall the fire spread damaging both the post office and the hair salon. If there wasn’t a lot of fire damage there certainly would be lot of water and smoke damage.

Oceanport Mayor Mike Mahon was at the scene reassuring Justine Talarico that he and the town would do everything in their power to get her relocated hair salon and have her back to business with as little pain as possible.

Enzo stood off to the side by the hedges watching his dreams go up in smoke.

“Enzo is pretty broken up about this,” said Mayor Mahon.” We’re already talking about finding a place for him to cook… A firehouse, first aid, anywhere there’s a kitchen. We’ll do everything we can do do keep him cooking. He still has his mobile kitchen, so that’s a good thing.” His mobile was at Monmouth Park for a fundraiser supporting disabled jockeys when the fire broke out.

“Enzo is a mainstay in this  town,” Mahon said. “This weekend he’s in charge of keeping the emergency responders  who are working the Haskell  fed and hydrated. We will find him a place to work out of.”

He could not tell us what had caused the fire, though he was sure it started in Enzo’s.

“We just got up and going from Sandy,” said a distraught Justine. “We were finally on our feet and now this happens. Being so close to the river her business had been destroyed by rising tides caused by Superstorm Sandy in October 2012.

“I was in the Highlands DJ-ing tonight, A friend called me and said there was a fire and I should go home and check on my dogs. I drove home so fast. I had no idea my business was on fire, too,” Justine said. “I’m told there’s no way I can get back into my salon.”

“We’re going to help everyone,” Mahon said. “We’re already working on it. There are vacant stores we can look into for the time being. Just be thankful no one was hurt,”  he said.

Firemen work on the roof of the building. 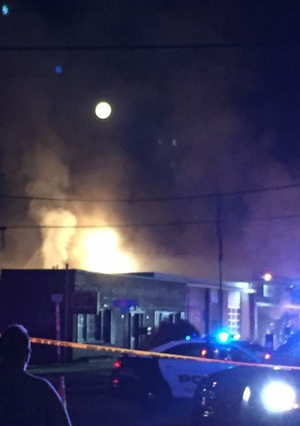 Flames rising high as the blue moon rises in the sky. 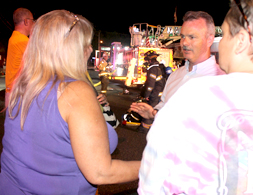 Firemen were still cutting holes in the roof and checking for hotspots after 10:30pm