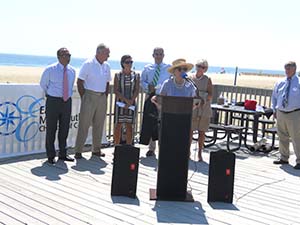 By Neil Schulman
Sea Bright — New Jersey’s beachfronts face many environmental threats in the coming years and decades, from erosion to rising sea levels to major storms like Hurricane Sandy — and advocates fear the state isn’t putting enough money aside in its Shore Protection Fund to cover the costs.

On Tuesday, the Jersey Shore Partnership held a press conference on the Sea Bright beachfront to advocate for increasing the Shore Protection Fund from $25 million a year in the state’s budget to $50 million. They were joined by Sea Bright Mayor Dina Long, Freeholder Tom Arnone, Assembly members Mary Pat Angelini and David Wolfe, and State Senator Joe Kyrillos.

The state representatives there are sponsors of bills to double the amount put aside in this fund each year.
“We’re here to highlight how the Jersey Shore is important to so many,” Long said.

The beach has always served as a buffer during major storms, keeping the ocean from damaging oceanfront property. Long said that longtime Sea Bright residents will tell you how waves used to come over the seawall during heavy storms. And that seawall was built to hold the waves at bay.

“Our infamous sea wall was once built as a buffer for train tracks,” Long said. More attempts to keep the borough safe followed.

While Sea Bright is attempting other forms of mitigation – elevating homes and other ways to reduce flood risk – “all of this is for naught without sand,” Long said.

While protecting lives and property is a major reason to maintain our shore, it’s not the only one. According to the Jersey Shore Partnership, every year, visitors to the shore bring over $19 billion in revenue.

Arnone said that when Sandy hit, tourism revenue hit a snag last year. Healthy beaches have helped it recover, as can be seen from the crowds on Monmouth County’s shores.

“It’s gratifying to see, from Sandy Hook to Brielle, every bridge and every road” filled with people going to the beach, Arnone said.

But those beaches require maintenance, and it’s often more than a small community can afford. When the federal government works on shore projects, it typically requires a 35 percent contribution of the costs from the town.

And while the federal government paid for almost all of the costs of rebuilding for Sandy, those projects need to be maintained, at local’s expense.

New Jersey steps in to cover much of municipalities’ 35 percent share, in part from the $25 million it puts aside in the budget each year for the Shore Protection Fund.

The fund comes from the a realty transfer fee, the money charged for recording a property deed in New Jersey.
Assemblyman Wolfe and Senator Kyrillos said that the Shore Protection Fund had been started in the early 1990s, as a way to see beaches protected.

“Every year, we had to fight,” Kyrillos said.

Wolfe said a series of storms in the early 1990s, which did serious damage to shore towns, inspired the legislation to see if there was a solution. They discovered this was a long term problem.

“There was a drowsy state committee called the Beach Erosion Committee, established in the 1940s” to deal with this problem, Wolfe said. Trenton woke that committee up, and helped get funding for the Shore Protection Fund in place through the current system.

Versions of the bill are still before their respective committees in the senate and assembly, which must approve it before the whole legislative bodies can vote on it.

The bill has support from politicians in both parties, though as is the case with everything in the New Jersey, allocating money is always a problem.

Assemblywoman Angelini said the funding is worth it.

“God has given us this natural resource. It’s up to us to protect this,” she said. “We are in a budget crunch, but we have to prioritize.

Margot Walsh, Executive Director of the Jersey Shore Partnership, said that the groups mission is to ensure state and federal funding for New Jersey’s shoreline.

“Today, our advocacy role is more important… than ever,” Walsh said. “The reality of sea level rise and the frequent Sandy-like storms are a warning to be proactive, not reactive.”

Links for people who want to urge legislators to support this proposal can be found on the Jersey Shore Partnership’s website, jerseyshorepartnership.com.