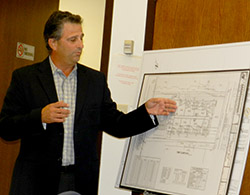 By Neil Schulman
Long Branch — Proposals for the beachfront redevelopment zones continue to come in. The latest one is for a 40-unit, six-story apartment building at 345 Ocean Boulevard.

At Tuesday’s City Council meeting, officials saw a presentation by architect Jim Monteforte describing the proposal for the building, to go on currently vacant land between Ocean Boulevard and Ocean Avenue.

All apartments would be two- or three-bedroom units, and all would have an oceanfront view, Monteforte said. They would range in size from 1,300 to 2,400 square feet. The building would be terraced.

The effect, Monteforte said, would be like an “Italianesque mountainside, where you see all the houses come out of the mountain.”

There would also be trellises around the building, to provide some privacy from neighbors, and to focus the views to the ocean.

The building would have 81 parking spaces — the city’s redevelopment plans require two paces per unit. Ten would be in the courtyard; the rest would be located under the building.

Because the property is in a redevelopment zone, City Attorney James Aaron said the next step will be to get a developer’s agreement created for council to approve. After that, the project can be presented to the Planning Board.

City Administrator Howard Woolley said he hoped to be able to give the group at least conditional designation as developer quickly, because it’s moving rapidly.

“They’ve gotten further, faster, than any (other) developer,” he said.

Shuttles still not breaking even

The EZ Ride Shuttles used in Long Branch still are not making money, which might be an issue when the federal subsidies expire in a year.

Council has renewed the contract for year-round service.

Jake Jones, Director of Community and Economic Development, said that the most frequent users of the shuttle are Monmouth University students, who get on free with student ID.

The university will be reimbursing Long Branch $3,000 for the service, but that still isn’t enough to make it profitable, Jones said.

The shuttle route includes the dorms located in West End and Monmouth University. It also stops at several locations along the oceanfront, the railroad train station, and other areas, set by where the ridership is.

Jones said that last year the city tried to get local companies to buy advertising on the shuttle to offset the costs, with little success. Only one business was willing to sponsor it.

City Administrator Howard Woolley said that if at all possible, they don’t want to see the shuttle go away when federal funds dry up.

“We want to put our heads together and see if we can find something to support it,” he said.