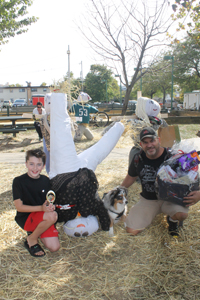 It was a blast in West End on Saturday as doggies, and some owners dressed up for the 7th annual Pooch Parade, sponsored by the Greater Long Branch Chamber of Commerce and the City of Long Branch.

The parade went off without a hitch or nips, but there were a few yips. Dogs

of all sizes strutted down Brighton Avenue. Before and after they did their

thing there was plenty to keep everyone occupied.

Brighton Ave was closed to traffic and was lined with booths filled with crafts, a stand for pumpkin painting, face painting, fire truck rides, touch a truck, all the shops were open and of course there were all the makings in case someone wanted to make a scarecrow. Plenty of original and clever hay-stuffed figures in the park waiting to be judged as to who was the best. It was to be a hard choice. Although The LINK’s favorite was Auntie in her housecoat having a cup of morning Joe and, of course, reading the latest copy of The LINK News.

After the dapper doggies were judged the band Golden Seal set up in the band shell and kept everyone entertained the rest of the afternoon.

2nd – Taking second place was Benjie dressed in a grass skirt, with Lia Parameritis from Bridgewater.

1st – The first place summersaulting scarecrow was made by Donald DeVingo.

2nd – Second place scarecrow was everyone’s favorite aunt who likes to have a hot cup of coffee and read The LINK News in the morning by Colette with Grandma Lisa Milani of Long Branch.

The Long Branch Police K9 demonstration is always a big hit of the day.

Frank and Teja Dicopoulos had a table set up at the Pooch Parade with handmade fun jewelry.

Brighton Ave was blocked off to traffic.

Stephanie Juarez of Long Branch wants to make sure her face paint is perfect.

Sarlito, an Old English Sheepdog dressed as a devil, with Eduardo Cervantes and Erika Danieloa.

Nikki and Robert Frost were volunteers at the booth for Ronald McDonald House. They had a lot of goodies to choose from including Rondald McDonald socks that would compliment any outfit!

Ricky, a Jack Russell came to the parade as a tarantula.

Ginny Mingolla of Eatontown with her grandchildren Sofia and Maria enjoy the fire truck rides.

Long Branch Teachers Angela Matty, Donna Clay and Irina Kinley volunteer at the booth representing Long Branch School Employees. One message they were getting across was “Get out and vote” at the next school board election. There will be a “meet the candidates” in the Long Branch Middle School Auditorium on October 26, 7pm.

John Pallone with John Jr. are all business while building their scarecrow.

Golden Seal kept the crowd in West End entertained once the parade was over.

Always a favorite are rides on the fire truck. Drivers for the day were Captain Kevin King from Oliver Byron and Lt. Patrick Gleason from Elberon Engine.

Posing Pretty is Sophie the fairy, a Boston Terrier owned by Kristi Topp of Long Branch. Holding Sophie’s leash is Tim Fawcett. “I don’t care what the judges say,” Sophie said. “I will take first. How can I not?”

Taking second place was Bengie dressed in a grass skirt, with Lia Parameritis from Bridgewater.

Second place scarecrow was everyone’s favorte aunt who likes to have a hot cup of coffee and read The LINK News in the morning by Colette with Grandma Lisa Milani of Long Branch.