Ocean’s Thompson rumbles in the rain

Bobby Riordan gets 2 of 3 Falcon goals 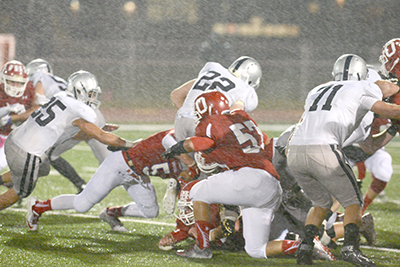 By Walter J. O’Neill, Jr
Friday night many along the Jersey Shore were fixed on the path of Hurricane Joaquin. Don Klein and his coaching staff at Ocean Township High School had their sights on the Manasquan football team. The Spartans were hosting in a non-divisional game.
OTHS, which is celebrating its 50th anniversary, had big plans for Friday night which included honoring alumni and holding the annual homecoming parade. However, with the driving rain, strong winds all those plans were put on hold.

However the game was still on and one thing was certain, even pre-Hurricane Joaquin couldn’t stop Tyler Thompson of Ocean Township. The senior running back who had two thousand yards rushing his first two years of high school and suffered a broken leg last year is definitely back.

Thompson ran the 29 times for a game-high 229 yards as the Spartans beat Manasquan 26-12. With the victory Ocean improved to 3-1 on the season and out of the four games Thompson had only one game where he did not gain 100 yards or more.

Field conditions were great as Ocean Township is in their second season of using synthetic turf. Ocean scored on their very first offensive possession. During that opening drive

Thompson ran 53 yards before Manasquan tackled him on the two-yard line. One play later junior quarterback Kenney Pickett dove in for the first Spartan touchdown. The extra point attempt failed, but Ocean had a quick 6-0 lead.

During the second quarter Thompson had another huge breakaway of 48 yards again getting stopped just short of the goal. With a third and two, Pickett ran a quarterback keeper and scored. The extra point was good and Ocean was up 13-0.

With two minutes left in the first half Thompson ran 29 yards for another touchdown.
On their next possession Manasquan  fumbled the ball on their own 25-yard line which was recovered by senior defensive back Greyson Stoothoff of Ocean. A few plays later with only 4.8 seconds left in the first half and facing a fourth and seven from the Warriors eight, Pickett faked a handoff to Thompson, rolled out and fired a perfect pass to junior wide receiver Joey Aldarelli for the last Ocean touchdown of the game. The extra point attempt failed, but Ocean had a 26-0 lead going into the halftime break.

“Tyler is the best running back in the Shore Conference,” said Klein. Thompson shows no signs of ill effects of the broken leg from last season, which required surgery to repair. “In a game like this, we were going to lean on him heavily and he made some big plays for us.”

Hurricane Joaquin and the Manasquan defense could not stop Ocean Township senior star running back Tyler Thompson who had 229-rushing yards and one touchdown in the 26-12 victory over the Warriors.

Junior quarterback Kenney Pickett (2) of Ocean ran for two touchdowns and threw for another backed up by great blocking.