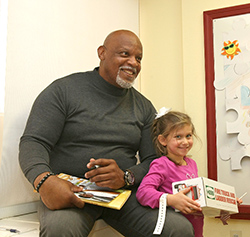 Former New York Yankee Cecil Fielder, who was traded to the New York Yankees on July 31, 1996, and was integral in the Yankees’ World Series championship that year, handed out toy trucks to the children, signed autographs and posed for photos with patients and staff in the Pediatric Emergency Department, Valerie Fund Children’s Center for Cancer and Blood Disorders and the inpatient unit.

At Monmouth Medical Center, there are close family ties to the Hess Family, as the hospital’s cancer center is named for Leon Hess, the late philanthropist and founder of energy giant Hess Corp, and there is special significance for his “extended” prominent New Jersey family, as well. His late wife, Norma Hess, is the sister-in-law of the late Jacqueline M. Wilentz — after whom Monmouth’s breast center is named.