Our police are on it!

Theater Review: Couple may have Substance, but it doesn’t bring them Bliss 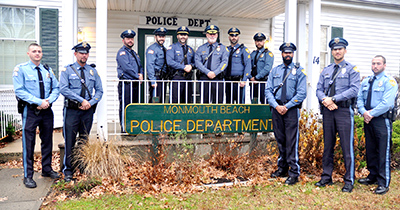 During the past several weeks, multiple package thefts and 10 thefts from motor vehicles have been reported to our MBPD.

Five of the car break-ins have been in the Shorelands section (Shrewsbury Drive, Monmouth Parkway and Navesink Drive) and have recently led to an arrest. Luckily, an observant resident who happened to be up on January 3, at around 3:30 in the wee hours of the morning, and glanced out his window, observed a suspicious person looking in cars with a flashlight and immediately called the police. This prompted the quick response of patrol officer Kevin Derkes, who was already in his patrol car not far away was able to confront the person.

That lead to their subsequent arrest with an assist from officer Daniel McManus, who also responded to the scene.

Nicholas Horvath of Navesink Drive in MB was arrested and charged with Burglary from a Motor Vehicle, Theft of Property, Trespassing and Possession of False Identification. Horvath was released on $5,000 bail.

Police determined that he was using the light on his cellphone as a flashlight and was opening and pilfering unlocked cars.

Chief Tom Walsh would like to remind residents to lock their car doors at all times and contact the police department immediately when suspicious activity is observed. He adds that, “In my 21 of police service I have never had a case where a locked vehicle was broken into, they always go to the unlocked vehicles.”

Chief Walsh allows that this arrest was a direct result of cooperation from an observant public working in conjunction with law enforcement.

The other car break-ins were on Riverdale, Griffin, Tocci and at the Getty Station.
In 2015 our MBPD made 127 arrests, 2,203 traffic stops (resulting in 1,098 summonses) and went on 104 First Aid calls and 64 motor vehicle accident calls.

Of the 127 arrests, 25 were drug related and the other 102 were from traffic warrants, harassments, assaults, intoxication, burglaries and vehicle thefts.

While the number of arrests made falls almost exactly on the national average of one arrest for every 28 members of the population, we thankfully fall way short on murders, rapes, hate crimes, violent crimes, robberies and arson.

In fact, the last time a gun was fired by an officer in MB was several years ago to put an injured deer out of its misery after it had been hit by a car.

If everyone in MB remembers to lock their homes and vehicles this year we can reduce that number of arrests by even more in 2016!

FYI, you can join the “Monmouth Beach Residents” page on Facebook to keep abreast of goings on in town, to ask questions, lend advice and buy, sell or swap items.

There was a flurry of excitement around town this past weekend, starting with a coyote sighting on Ocean Ave., prompting many 911 calls. While people tracked the handsome and healthy looking beast as he trotted through Sea Bright and on to Sandy Hook using the main road, he bothered no one on his way.

Then the Mart was abuzz of activity as many folks stood in line to buy Powerball tickets and chatted and dreamed about just how much fun they could have with that $900 million – after they had paid off all their debts and taken care of needy family members first of course.

On Saturday night a car drove up Monmouth Parkway around dinner time and threw some sort of firecracker or M80 out the window onto a lawn, which sounded like a bomb going off and left acrid gray smoke thick in the air. The car proceeded to go south on Navesink Drive and throw out two more deafening explosives to terrify residents and their pets. My beagle and chihuahua were trembling for hours thank you very much rude pranksters!

Then Sunday saw flooding all over town in all the usual wet spots, trapping people both in and out. It inspired happy kids to get their kayaks out to play in the streets.

Those who could get out headed to church or the Mart again to buy more Powerball chances as the un-won pot swelled to well over a billion dollars!

It all ended with a spectacular rainbow at the north end of town before the tides retreated at a leisurely pace and everyone could get home safely.

If you need an accurate 2016 tide chart for our town, the Channel Club Marina has them for free!

A special early Board of Education meeting was called on Jan. 4, with the Judge of Elections declaring Kathy Denker, David Baker and Kirk Ruoff for full three-year terms. School administrator Dennis Kotch administered the oath of office to the newly elected board members.

Kirk Ruoff was elected Board President and Sandi Gardner Vice President. Again, Dennis Kotch was appointed Business Administrator/Board Secretary and as the School Funds Investor, with James Cunniff as Treasurer of School Funds.

The board then appointed Dr. Morgan as medical inspector for the calendar year 2016 for a stipend of $4,000. Next the firm of Kenny, Gross, Kovats, Campbell and Parton of Red Bank as attornies at the hourly rate of $145; then Kellenyi, Johnson & Wagner, and Eric Wagner of Red Bank as architects; and the firm of Strauss Esmay Associates, Toms River, as policy consultants.

The tuition rate for the calendar year 2016 is Kindergarten through 8th grade is $7,000 per year.

As usual, the dates for 2016 board meetings which will begin at 7:30 p.m., are to be on the third Thursday of the month. The next board meeting will be January 21 in the MB School Library.

A special meeting of the Borough Commissioners on Jan. 5 meeting saw the following resolutions adopted: Award of Contract for the Installation of Lockers at the Monmouth Beach Bathing Pavilion to Shorelands Construction in the amount of $225,436; Award of a Professional Services Contract for Architectural Services for Alterations and Lifting of the Monmouth Beach Borough Hall, to Parallel Architectural Group for $76,640;

Improvements to Bathing Pavilion, $300,000; and Budget Transfers Authorizing a payment of $15,000 to DEP for a CAFRA permit application fee in connection with the modifications to the Bathing Pavilion as a result of the Seawall Restoration Project Award of Contract.

You can always contact me with story questions or ideas at 917-797-1324 or email me at dicopouli@aol.com

Fences make good neighbors or at least rectify the litter, skateboard and bike issues on the walkways in front of Resources Real Estate on Beach Rd.

Rainbows were spotted in many states after the storm.

My son Jaden kayaks down the center of Monmouth during the recent high tides. Go to Town Links to see a beautiful rainbow that appeared over the north end of town.

MB Police Chief Thomas Walsh advises residents to lock their homes and vehicles at all times even though an arrest has been made recently.