Library kicks off centennial with look at who built it 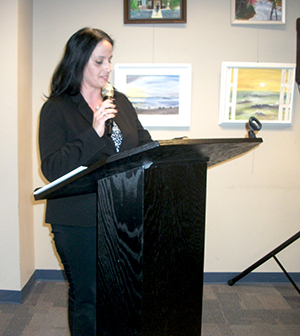 By Coleen Burnett
The famous industrialist Andrew Carnegie gave away most of his fortune by the time he died in 1919. Because he believed in the power of knowledge, a portion of that philanthropy went towards the founding of 2,509 libraries worldwide — 1,679 of them in the United States — in the late 19th and early 20th centuries. Did you know that one of them is the Long Branch Free Public Library, located at 328 Broadway? 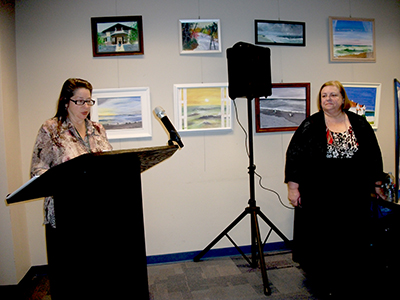 Lisa Kelly of the Long Branch Library introduces Eleonora Dubicki of Monmouth University to explain how Andrew Carnegie funded the construction of the city’s Broadway library.

The Library was incorporated on December 6, 1916. To kick off its year-long 100th anniversary celebration, a presentation was given January 28 by Monmouth University Assistant Librarian Eleonora Dubicki examining the history of the building and Carnegie’s role in it.

The city has long had a library in its midst, beginning with the founding of the Long Branch Reading Room and Library Association in 1878. Over the years, the system continued to expand, and the first inquiries about getting a Carnegie Library grant came as early as 1913 by then-Mayor Bryan Newcomb.

Newcomb was told he had to complete a special form and send it back to the Carnegie Corporation in New York.

You see, Carnegie and his personal assistant Thomas Bertram didn’t just rubber stamp the project and write a check.  The form had to be filled out by local officials and explain, among other points, the need for the facility, as well as promises from local officials that they would provide a building site and have the funds to maintain the library after it was built (using both public and private money).  A pamphlet was also enclosed in the package that contained sample building plans.

And most of all, the library had to be free for all to enjoy. There would be no charge to use it.
Long Branch Mayor Marshall Woolley personally delivered the forms to New York on January 6, 1917. The grant was approved rather quickly thereafter, on February 3. Although there were delays in its construction due to the outbreak of World War I, the library officially opened on November 16, 1920.

It’s the last “granted” library in the state that is still in use. The facility gets some 150,000 visitors per year.

Dubicki told the Link that Carnegie was the Bill Gates of his day — a sort of strategic philanthropist. Carnegie grew up poor in Scotland, and books were scarce and expensive. Libraries in the early years of the United States charged dues to use their facilities, so only the wealthy could afford to take out a book.

Carnegie wanted to bring the gift of reading and education to the masses.
“He firmly believed to give back to society. He felt libraries supported the society,” she said.
“It was a form of philanthropy, not charity,” she continued, “It was a long-term thing – the whole community could improve itself by having a library.”

And apparently after the grant was approved Carnegie and his underlings would not follow up on a building’s progress. There is no record of either Carnegie or Bertram visiting Long Branch during the construction, nor is there any evidence anyone from the Carnegie Corporation attended the library’s official opening. The two men apparently got a lot of invitations from all over the country to visit the creations they helped to build, but they politely declined most.

Maybe Carnegie himself said it best: “There is not such a cradle of democracy upon the earth as the Free Public Library, this republic of letters, where neither rank, office, nor wealth receives the lightest consideration.”