Enjoy Feeling “Inside Out” at the Long Branch Public Library 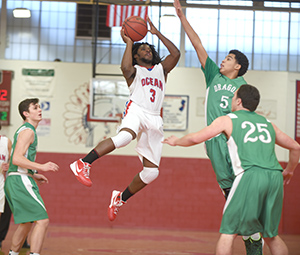 By Walter J. O’Neill, Jr
On Saturday afternoon the Dragons of Brick were in Ocean Township for a nondivisional Shore Conference boys  basketball game. The Spartans defeated the Dragons 71-50 while playing one of their best overall games of the season.

The first quarter was tight, but Ocean held a slight 13-10 lead. It was the second and third quarters were the Spartans showed their grit. They outscored Brick 18-9 to close out the second quarter and 21-12 to start the second half. The final eight minutes were dead even at 19 points each.

However, the Spartans had the victory with Darius Brown scoring a game-high 20 points. He also had six rebounds and two steals. Ru’Quan Dean was on fire as he used his speed and ball-handling skills to drive to the basket and either score or dish off for an assist. He finished with 15 points, five rebounds, five assists and two steals.

Ocean’s three big men, Yianni Kavarakas, Scott Bradley and Andrew Seager dominated the boards. Combined they had 20 rebounds and scored 22 points. Kavarakas had seven rebounds, three assists and finished with 10 points, while Bradley had five rebounds, one block and had six points. Seager pulled in eight bounds and also had six points.