Quick Response by Family, First Aid and Monmouth Medical Center Save the Life of Oceanport Man

Save the date for ‘Made in Monmouth’ 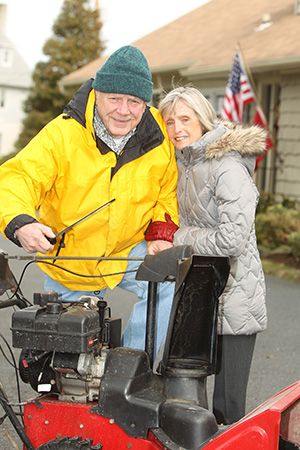 LONG BRANCH, N.J. – For Oceanport resident Thomas Williams, Winterstorm Jonas proved to be a perfect storm with near disastrous results.
The 69-year-old painting contractor, like countless other East Coast residents, spent hours on Saturday, January 23, digging out from the snowstorm that produced prolific amounts of snow in our region.

But unlike nine others on the East Coast who died from cardiac arrest while shoveling snow, Thomas survived a massive heart attack that occurred at the height of the blizzard thanks to the quick reaction of his wife, the Oceanport First Aid Squad, and a team of doctors and nurses at Monmouth Medical Center.
“I remember pushing the snow blower, and coming inside and taking off my boots, and feeling short of breath,” he says. “I took two baby aspirins and then my wife told me to lie down on the couch.”

His wife, Gayle, asked if she should call the EMT’s, and Thomas said when he told her, “I think you better,” that’s when she knew it was serious. Moments later, he would suffer what is commonly known as v-fib — formally ventricular fibrillation — the most serious cardiac rhythm disturbance.

“With v-fib, the lower chambers of the heart quiver and the heart can’t pump any blood, causing cardiac arrest,” said Monmouth Medical Center interventional cardiologist Michael A. Wappel, M.D., who performed emergency cardiac catheterization and percutaneous intervention that opened Thomas’ blocked artery and restored the function of his heart.

“Everything worked perfectly,” he said.

First, his wife, a retired high school guidance counselor with the Long Branch School System, called 911 immediately and performed CPR — a technique she had become certified in by the Oceanport First Aid Squad years before when the older of her two sons was born with a congenital heart blockage — until help arrived. The EMT’s saw he was in the lethal arrhythmia and shocked his heart to get it beating again, and transported him to Monmouth Medical Center’s Emergency Department, where he arrived at 4:30 p.m.

In Monmouth’s ER, they initiated a “Code STEMI” — the process put in place to treat all heart attack patients. Back in 2006, Monmouth Medical Center joined the American College of Cardiology in launching a national quality improvement initiative with the goal of ensuring that patients like Thomas with ST-segment elevation myocardial infarction (STEMI) undergo emergency angioplasty. The result was “Code STEMI” and the results have been impressive.

For any patient arriving at Monmouth Medical Center with symptoms of a heart attack, Emergency Department physicians order an electrocardiogram (EKG) within minutes. An EKG can detect signs of poor blood flow, heart muscle damage, abnormal heartbeats and other heart problems. If a heart attack is diagnosed, the Code STEMI is activated, with the on-call interventional cardiologist and the specially trained cardiac catheterization team called in for emergency treatment. The Code STEMI team that cared for Thomas, led by Dr. Wappel, acted quickly despite the blizzard, performing a lifesaving emergency angioplasty.

“Dr. Wappel did a miraculous job,” Thomas said. “All of my doctors were phenomenal.”

“My colleague, Dr. Jeffrey Osofsky, was covering the hospital, and he coordinated everything until I arrived, where Thomas was in the cath lab — prepped and ready to go,” Dr. Wappel said. “It was a huge team effort from the moment of his heart attack through his cardiac catheterization and interventional procedure. It was truly amazing considering the blizzard conditions.”

Dr. Wappel notes that beyond the advent of interventional cardiology, the cardiac arrest Thomas suffered was known as a widow maker.
“Previously, doctors wouldn’t have been able to offer his family much hope,” he said.  “This is a classic type of heart attack, and with the interventional cath, we were able to open the blocked artery with a stent. “

Dr. Wappel notes that even though Thomas lost about half of his heart function as a result of his heart attack, the heart muscle was stunned and the loss is not permanent.

“I think we’ll see his heart muscle recover,” he said.

He adds that a big concern in cases like this is damage to the brain, and he says he considered therapeutic hypothermia — a treatment that tries to achieve and maintain a specific body temperature in a person surviving out-of-hospital sudden cardiac arrest and that can significantly improve rates of long-term neurologically intact survival.

“He was in recovery following the cardiac cath by 9 p.m., and he was wide-awake and alert, and so there was no need for him to go through that,” Dr. Wappel said. “The next morning when we checked on him, he was absolutely fine and suffered no memory loss.”
In fact, during a conversation with Thomas prior to his hospital discharge on January 27, he vividly recalled a visit in late November to his longtime primary care doctor

Monmouth Medical Center internist Michael Disciglio, M.D., who several years earlier had suffered and survived a “widow-maker” heart attack thanks to the exact same Code STEMI process that saved Thomas’s life. Thomas had undergone a stress test during that office visit, and he said even though it yielded good results, it prompted him to finally quit smoking.

“Dr. Disciglio had been after me for years to quit smoking, and I figured my negative stress test was telling me I had pushed my luck long enough,” he said with a smile.
Dr. Wappel notes that in every snowstorm, cardiologists see this type of heart attack in patients who had been exerting themselves clearing snow. In the case of Winterstorm Jonas, he said the weather conditions combined with the type of blockage Thomas had created a perfect storm culminating in his heart attack.

“Thomas didn’t have a severe blockage — his artery was less than 50 percent blocked— but he was out in the cold, which restricts arteries,” he said, adding that in this case, there was a lot of snow, and it was colder than usual. “One of the major reasons shoveling snow can lead to a heart attack is the sudden stress of the shoveling then causes the plaque in arteries to rupture, causing the coronary artery to also develop acute thrombus (blood clot) and completely close, which starts the process of the heart attack.”