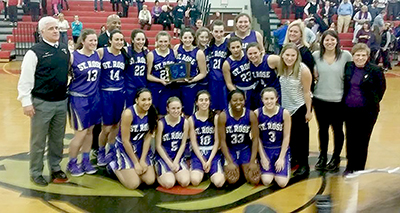 Joe Whalen, head coach of the St. Rose girls’ basketball team, has been named the National Federation of High School Coaches Association Coach of the Year for New Jersey in girls basketball.

Joe Whalen, head coach of the St. Rose girls’ basketball team, has been named the National Federation of High School Coaches Association Coach of the Year for New Jersey in girls basketball.

For decades Whalen has been coaching basketball on all levels, from AAU, high school and the semiprofessionals. He has been coaching at St. Rose High School in Belmar the past few years. Last year the Purple Roses set a school record of 32-2, were the NJSIAA Non-Public B State Champions and were a finalist in the Tournament of Champions. St. Rose was also ranked number 33 in the country.

This year, St. Rose finished 24-5 and was undefeated at 14-0 in the Shore Conference B Central division. St. Rose also made a return trip to the NJSIAA state championships this season; unfortunately they lost 65-47 to Rutgers Prep in the South Jersey, Non-Public B.

Whalen was asked what his greatest memory in the sport was, his answer was not about winning a state title. “It was being afforded the opportunity to coach my son, Ryan. I have witnessed his development from a player into an excellent coach. Ryan is now coaching at a very high level and I couldn’t be more proud,” said Whalen.

On the opposite end of the spectrum his worst memory occurs every year. “Not coaching my players anymore. Every four years we have to say goodbye. During those years we have some great memories and we shed a few tears. As a coach, it makes it very tough to say goodbye,” said Whalen. He added that as a coach, he thinks he can protect them all the time. “At the end of the day hopefully you teach them life lessons, and here I am getting life lessons from them.”

Great coaches all have special skills, attributes that put them above the ordinary coach. However, when you try and nail them down on what those qualities are they don’t seem to know. “This is a tough question to answer, because introspection can be very challenging. I believe my passion for the game and my desire to not only be the best coach but be the best teacher of the game. Most players feel that they play for the best coach, I want my players to know they play for the best,” added Whalen.

As for an area that Whalen feels he needs to improve, he answered quickly saying that the losses bother him and he needs to put them behind and not stress. Not only for his own peace of mind, but that of his family who lose patience with him.

After coaching for so long he was asked what he likes the most about the job. “I love the challenge of competition and making my teams better. I try to make my teams ‘self-correct’. That is something I learned when I spent two days in San Antonio for the NBA Spurs’ training camp. I believe smart coaches have certain players make plays not run them,” said Whalen.

To date his record is 104-15 at St. Rose High School. That does not include his time as an AAU coach, or at Long Branch High School where he coached the boys to a state title, or even his JSBL numbers. During his long career he has been able to coach both girls and boys to state titles.

“First I can tell you the girls huddle smells better,” said a laughing Whalen. “I will say that I have not coached girls any differently. I have challenged them and held them to as a high a standard as I ever did any boys team, and they’ve responded well.”

He added that they never talk about playing hard, they just do it. “That’s the culture and the expectation, and they do it as well as any boys’ team I have ever coached,” Whalen said.