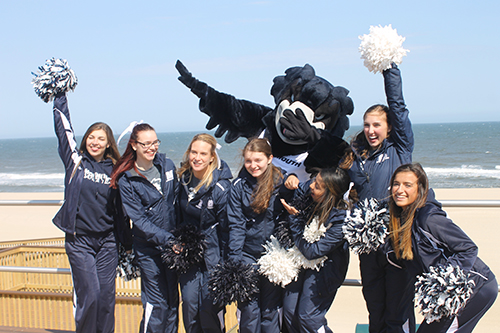 By Neil Schulman
Long Branch — Last June, as the city broke ground on its new boardwalk, Mayor Adam Schneider promised he would show up to the opening in shorts and sandals.
On Monday, with temperatures in the 50s, he kept that promise at the ribbon cutting ceremony inaugurating the new boardwalk, the largest capital improvement project the city had ever undertaken.

The mayor said he would have shown up dressed for summer weather if the ribbon cutting had been in February.

“It’s summer down here in Long Branch right now,” he told the crowds that showed up for the ceremony. “We’re all at the boardwalk. We’re all by the ocean.”

And if builder George Harms Construction hadn’t found several large boulders that caused an obstacle, the mayor might have been much colder. That pushed work back several weeks, but it still opened way ahead of the Memorial Day weekend deadline in the contract.

“We’re standing now approximately 30 feet above sea level,” he said. “It protected us during the superstorm. Unfortunately, our bluffs took a beating.”
This wasn’t just a matter of putting new boards in. The bluffs needed to be repaired – and were reinforced with steel sheeting to help them withstand any comparable disaster in the future.

City representatives weren’t the only ones on hand. Local Freeholders, the district’s state senator and assembly members, and many other officials spoke at the ceremony. Even Monmouth University cheerleaders and the MU mascot Shadow was on hand to celebrate the event.

Woolley said that they all made the project possible, as did many in the city. FEMA was also vital, supplying much of the funds for the new boardwalk.
“This is, by far, the largest capital project the city has ever undertaken,” Woolley said.

Schneider also thanked all the residents who lived by the oceanfront “and never complained” about the noise from the construction over the last six months.
The new boards are wider than the old ones, and built with storm-resistant techniques. They have three concession stands, and a vendor has already been selected for the summer.

At the ribbon cutting ceremony, Emanuel di Pasquale, Long Branch’s poet laureate, read a piece he had written while watching the construction work, “On the Resurgence of Long Branch’s Boardwalk.”

It concluded with the line “and all is ready for our city’s rebirth,” a sentiment also expressed by other speakers.

“We always come back, and we come back a little bit stronger,” said Senator Jennifer Beck. “It was a herculean effort, but look at the results.”
Mayor Adam Schneider said that the new boardwalk would be the start of an amazing summer.

When Sandy hit in 2012, people thought it might keep people away the next summer. But revenues from the beaches stayed high.
“[20]13, 14, 15 – three of the best summers we’ve ever had in Long Branch,” Schneider said. “Summer of 2016, starting now, is the best time in the City of Long Branch.”