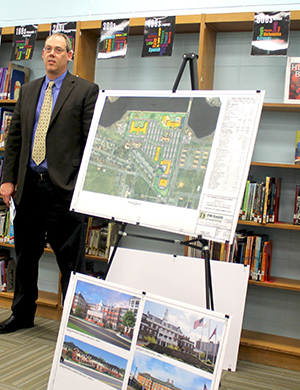 Tim Lurie of DW Smith describes the plan and building designs envisioned for the 27+ acres.

By Neil Schulman
Oceanport — While the borough has little power to make it a reality, Oceanport officials like the proposed plan to create a continuing care retirement community, hotel and retail in part of the former Fort Monmouth.

Tim Lurie of DW Smith describes the plan and building designs envisioned for the 27+ acres.

At the May 5 Borough Council meeting, officials from New Century made an informal presentation showing their plans for the 28 acres of waterfront property.

FMERA, the Fort Monmouth Economic Revitalization Authority, has control over what is developed for the fort, and hasn’t even issued requests for proposals for this particular area. Oceanport has only one seat on the FMERA board, but officials from New Century said they wanted to make this presentation to gauge interest.

Jim Kahoe, project advisor, said the largest part of the proposal was 300-400 units, for a combination of independent living and assisted living. Because the program is set up for people getting on in years who may need assistance with their life, it would not bring any school children to Oceanport,

There would also be a 120-room hotel with a restaurant next to the facility. That’s to help out of town family members visit relatives, though the hotel will be open to anyone.

A boardwalk would be put up by the waterfront. The would also be a few retail stores in the area.

Kahoe said the project would create 150 temporary construction jobs for two years. The care facility will create 300 jobs, and the hotel an additional 70.

He also said that New Century is not looking for a PILOT, payment in lieu of taxes, which several projects at the Fort have sought. It will be financing the project in other ways.
Council members sounded pleased with the concept.

Councilwoman Patty Cooper, who said she had recently had to help her mother move into an assisted living facility, liked the payment system proposed, where residents pay a monthly rate, and 10-20 percent of the facility would use Medicare.

“That’s very important. Some of the places were having $500,000 bonds (required) to move in,” Cooper said.
Others said they appreciated the idea of a hotel, and the concept of making it easy to visit loved ones.