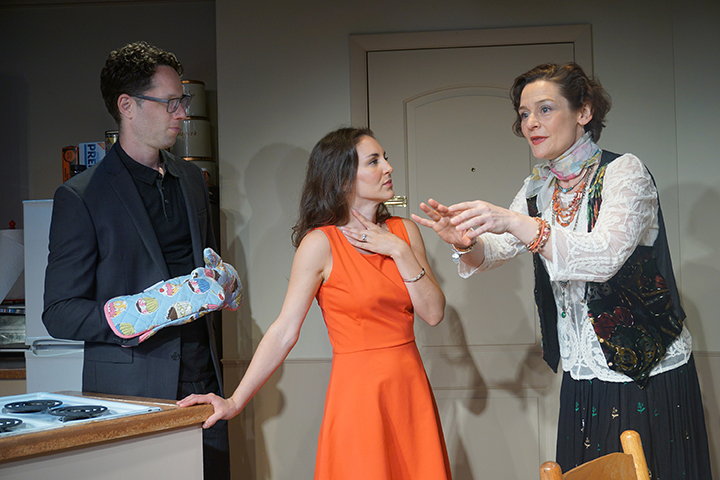 The heroic Holocaust survivor Elie Weisel passed away Saturday, the day on which I attended the premiere of Sandy Ruskin’s new serious comedy, Struck. Anti-Semitic memes are easy to find on the internet. These facts are not irrelevant to Struck, which shows that the evils which Elie Weisel devoted his life to battling have not been eradicated, and the effects of the Holocaust are still felt.

Nate (Adam Bradley), and Vera (Susan Maris) Resnick, are charming and good looking. He is a divorce attorney, and she is an actress. Vera is established as being in her mid to late thirties (though Maris doesn’t look it), and the Resnicks are thinking of starting a family. They have a warm, loving, functional marriage, which is a pleasure to see on stage.

We meet them entering their Upper West Side apartment in the fall of 2013. Nate is supporting his limping wife, who has been struck by a bike ridden by James (Benjamin Puvalowski), and is sporting some spectacular leg bruises (very effective make-up!). Vera asks Nate to fish her phone out of her purse (“Don’t make me go in there!,” he jokes) so she can call James and reassure him that she is not going to sue.

Vera looks James up on Facebook, and sees he is an NYU student born in 1993 (“I was already having sex in 1993!”, is her reaction, which is how I computed her age).

Nate thinks this is a bad idea, but while he is absorbed in watching Mad Men, Vera makes the call, and soon Vera and her neighbor Vicky are welcoming James into the apartment. Vicky (Jenny Bacon) is a twice-divorced Texan, now into New Age and Buddha (“He’s fat, but he doesn’t drink.”).

The women are happy to meet this mild young man, who comes bearing flowers, a free month’s subscription to Ancestry.com, and a wonderful story about tracing a great grandmother thought lost in the Holocaust. Struck once more, this time by James’s tale, Vera invites him for Sabbath dinner, an invitation which leads to more striking surprises and events.

Adam Bradley and Susan Maris are great as Nate and Vera, whether he is praising her “no pants” look after the accident or she is trying in exasperation to end a phone call with her mother. Jenny Bacon puts a delightful spin on the trope of the wacky neighbor, and Benjamin Puvalowski successfully portrays the turns of a character we do not immediately know fully. Matthew Shephard, charmingly Gallic, rounds out the cast as a guest.

Struck shows how we can be physically struck in an accident or mentally struck by coincidence. We can be struck by unexpected terror and calamity, but equally by unexpected hope and happiness. People can be lost, but people can be found. We can suffer accidents and loss, but we can be comforted by each other. Struck is funny and thought provoking and (you saw this coming!) strikingly good.