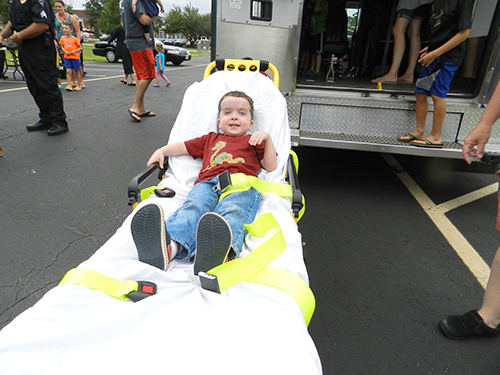 Connor Kwitkin, 4, relaxes with the First Aid Squad at National Night Out.

By Coleen Burnett
West Long Branch — On August 2nd, the West Long Branch Police Department held its second annual event to celebrate “National Night Out.” The occasion is meant to spotlight the positive works of your local police, fire and EMS departments and foster neighborhood goodwill.
Residents and children alike turned out to admire the police cars, fire trucks and ambulance on display, watch two K9 dogs go through their paces, and partake of free pizza and ice cream donated by local merchants.
Sgt. Michael Paolantonio helped to put the program together, and he told The Link that members of the department were equally generous with their time in order to make things happen.

“It’s all volunteer.  We’re glad to do it. It gets us out there” to interact with the public.

Chloe Chambers and Elle Tucci are fine — they’re just having some fun with the First Aid Squad’s equipment.

K9 Bia and Officer Anthony Carafa of the Allenhurst Police Department give a demonstration.

Grace Kilgour, 3, sees what it’s like in the front seat of a fire truck.

Connor Kwitkin, 4, relaxes with the First Aid Squad at National Night Out.