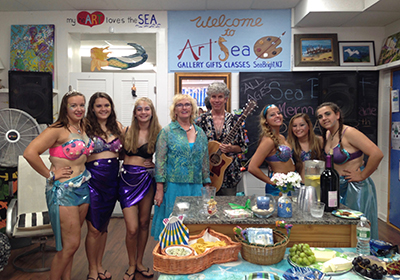 By Matt Engel
Sea Bright — People of all ages will be able to relax and let out their inner child at the Sea Bright Mermaid Parade on Saturday.
The event, which lasts from 11 a.m.-7 p.m., will have live music, food and drink, and face painting, as well as a free art project.

“We get people from all ages,” said Megan Heath Gilhool, an artist who is coordinating the parade. “From infants in little mermaid costumes, little boys dressed as pirates, teens in their handmade costumes, and adults all decked out in Merwear.”

The Mermaid Parade was started by Mrs. Gilhool in 2014 in an attempt to have a fun summer event for all ages. With its great restaurants, bars, and live music, Sea Bright served as a great place to invite people for a great night of celebrating, she told the Link News.

“I wanted an event where every other business in town could participate,” she said.

A self-taught artist who has been drawing and painting since childhood, Gilhool credits her friend Pinky for getting her involved in painting murals. Among them is one in front of the Sea Bright bus stop. Unfortunately, it was wiped out during Superstorm Sandy, and she now believes it is somewhere in the Shrewsbury River.

In an effort to reinvent herself after so much of her work was destroyed during Sandy, she opened ArtSea Gallery. It has since served as a place for local artists to sell their work, as well as offering art classes for all ages and levels. Its popularity has been spread through social media, boasting nearly 1,500 likes on Facebook.

“I love to see people of all ages having fun together,” she said.