Funeral and viewing for Kevin Hoy 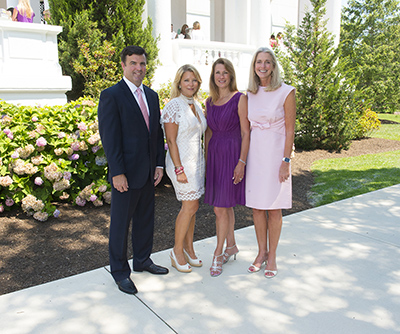 Jenna Bush Hager, contributing correspondent for NBC’s “Today” show and author, was the featured celebrity guest speaker at the event. Daughter of former President George W. Bush, Hager shared with the audience about how cancer had touched her life and her family’s.

“Life is a precious gift,” she told the audience. She shared with the crowd the story of Robin Bush, the daughter of George H.W. Bush. When Robin was nearly four years old, she was diagnosed with leukemia, a death sentence for children in 1953. She explained that the loss of her life was incredibly difficult on her grandparents. But her message was not one of grief, but helping others in their time of need.

She strayed from the topic of cancer to share a lesson she has learned in her own life. She spoke about the plot of her novel, The New York Times best -seller “Ana’s Story: A Journey of Hope,” which she wrote after time she spent during 2006 in Latin America as an intern for UNICEF. The book is about a 17-year-old single mother that she met there. The mother has AIDS, but is doing everything in her power to protect her baby from a world of neglect that she had to live through.
She spoke about how important it is to do good deeds and have a positive effect on others, no matter how small the impact is, telling her audience that she became a teacher because she knew she wanted to have a profound effect on others, and in her own way, help change lives.

“Each year, Power of Pink provides us with an opportunity to celebrate the important work of the Leon Hess Cancer Center and take pride in the outstanding care that is provided every day,” said Monmouth Medical Center president and CEO Bill Arnold.  “Cancer care is always evolving and we work hard to stay on the cutting edge and bring the best treatment options available to our patients. And yet we all know that outstanding equipment and programs mean nothing without an outstanding team of physicians, nurses, clinicians, and support staff to ensure that each patient receives the best, most personalized care available. The 2016 Power of Pink honoree, Dr. Tom Hackett is highly respected by his colleagues, Monmouth Medical Center leadership and staff and most importantly, his patients.”

Dr. Hackett earned his medical degree at the University of Medicine and Dentistry of New Jersey – New Jersey School of Osteopathic Medicine in Stratford. He completed a residency at the Naval Medical Center in San Diego and a fellowship at the Milton S. Hershey Medical Center at Pennsylvania State University College of Medicine in Hershey. He is a member of the Society of Gynecologic Oncologists, American College of Obstetricians and Gynecologists and American Congress of Obstetricians and Gynecologists.

The Power of Pink Luncheon raises funds for the Leon Hess Cancer Center at Monmouth Medical Center for the advancement of treatments and quality of care delivered to cancer patients. The Women’s Council was founded in 1995 when cancer survivor Bonnie Levin and concerned women in the Two River area identified the need to inform women about the importance of early detection of cancer and the progress being made in cancer research. Since The Women’s Council’s inception, nearly $3 million has been raised.