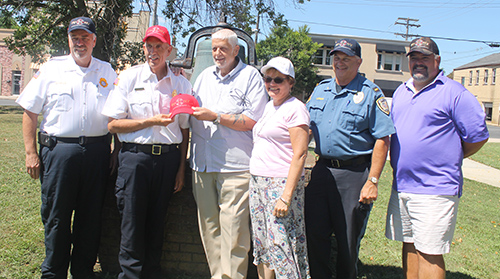 Hats donated in memory of Tiny Hayes tell a story
By Neil Schulman
Long Branch — On Aug. 23, Monmouth Rubber and Plastics donated New York Fire Department 911 Commemorative Hats to the Long Branch Fire and Police Departments, in memory of Francis ‘Tiny’ Hayes (1926-1998).
Approximately 100 baseball hats, with the New York Fire Department logo and a “911” on the front, over the phrase “Brooklyn Wall of Remembrance,” were given to the Long Branch. Police Lt. Craig Spencer, Fire Chief Ron Guidetti, and Director of Building and Development Kevin Hayes accepted them in a ceremony outside city hall.

John Bonforte Sr. of Monmouth Rubber, which is on Long Branch Avenue, said that they were donated in memory of Tiny, a longtime firefighter for the city, as a way to show that the work firefighters did is personal.

“We want to connect it with a name, a local name,” he said. The ceremony was also to show their gratitude to the firefighters, police and others who constantly work to protect everyone.

Kevin recalled his father, who had served with the Independent Engine and Truck Company for 50 years, as well as Executive Director of the Long Branch Sewerage Authority and the City Administrator.

“I try to emulate my dad. He was a very popular guy, loved the city of Long Branch.”

Bonforte Sr. also said he hopes the hat can start a conversation when worn, especially with those who are to young to remember the events of Sept. 11, 2001.
“Hopefully, with the hat, as they wear it they’ll explain to a youngster what it’s all about.”

Guidetti said that the fire department would be giving out the hats he received to local firefighters and first aid squad members.
The Brooklyn Wall of Remembrance was the first memorial in New York City to the firefighters who gave their lives on Sept. 11, featuring their portraits, engraved in granite. It is located outside the ball park in Coney Island.
On the wall’s website, it says that while Coney Island, known for its rides and games, might seem a strange place for a Memorial, it is an ideal place to celebrate the lives the firefighters lived.

“Families come here for comfort, not for grief. To hear the sound of children laughing, feel the sun’s warmth and listen to the quiet voice of the ocean,” notes thebrooklynwall.org.