Klein and Spartans ready for 2016

Yeshiva to open on Logan Road 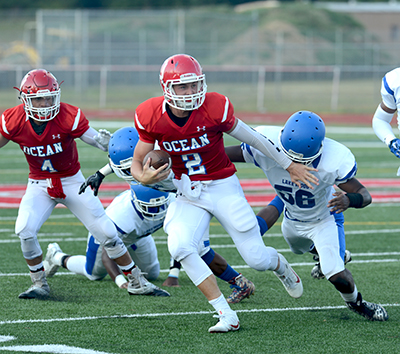 Ocean Township starting quarterback is Kenney Pickett #2, who is one of the best passers in the Shore Conference this season.

Don Klein has been the head coach of the Ocean Township Spartans for 10 years and is excited about the 2016 squad, who went 3-0 in preseason games.

Jasher Pena (4) will see a lot of action this year as a running back and receiving. Here during the preseason win over Lakewood he is tackled before the ball arrives.

Ocean Township starting quarterback is Kenney Pickett #2, who is one of the best passers in the Shore Conference this season.

Don Klein has been the head coach of the Ocean Township Spartans football team for ten years. Ocean has graduated seven starters on offensive side of the ball and eight on the defense. Last year the team placed second in the B North division with a 9-2 overall record.

“I expect us to be very competitive on a weekly basis and contend for both a division and state championship,” said Klein.

The B North division will probably be one of the hardest and toughest in the Shore Conference. This season the division has Middletown North, Middletown South, Red Bank Catholic, Long Branch and Wall Township. “I always said the B North is like the SEC in college football, a division loaded with powerhouse programs,” added Klein.

Looking at this year’s team Klein is very impressed. “I don’t know if I have had a harder working group in my ten years as head coach. This team is a lot of fun to be around and has explosive ability,” said Klein.

Kenny Pickett is the senior with his hands on the switch. He has been the starter since his sophomore year and grown into one of the best passers in the Shore Conference. “We have to protect him and get Joey Aldarelli into the game. They are our two key players to the team’s success,” Klein said.

During the preseason the Spartans went 3-0 and Klein has noticed that each day the squad has gotten better. “We will need the senior leadership to help us succeed this year as we play a very competitive schedule.”
Ocean will open on Friday, September 2, at 7:00 p.m. with a home game against Monmouth Regional High School. Traditionally the two schools played each other on Thanksgiving Day, however this year the Falcons decided to pull out of that game. For the first time in decades, the Spartans will have a football-free Thanksgiving morning.
defensive unit.