Caseys net 6 in win over Wave 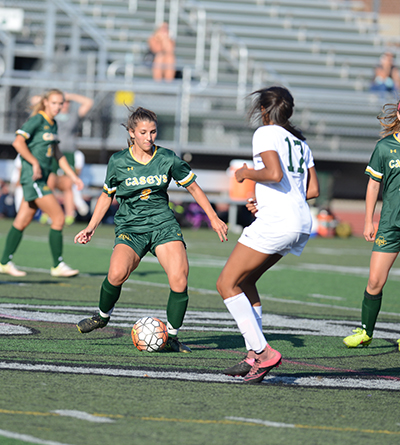 Working the ball for Red Bank Catholic is Daniella Caputo (9), a senior midfielder, while Yuririan Santiago-Reyes (13) a junior at Long Branch plays defense.

On September 13, the Green Wave of Long Branch hosted the ladies of Red Bank Catholic in a Shore Conference Class B North soccer game.

The first half of action was very exciting for the Wave which held a 1-0 lead until the very last minutes of the half when the Caseys were able to score two quick goals and take a 2-1 advantage into the halftime break.
“

We came out extremely strong and played well as a team in the first half,” said Jessica Wegelin, head coach of Long Branch. She enters her third year as coach and has steadily improved the squad. “A beautiful goal by May Daniels gave us a 1-0 lead against a great team like RBC and had everyone motivated to continue to play hard.”

The second half was all Red Bank Catholic as they scored an additional four goals and held the Wave scoreless. “We didn’t play as good as we should have in the first half,” said Frank Lawrence, who is in his fourth season as head coach of the Caseys. “Junior Bri Urbanski converted a direct kick from 30 yards out and Jyllissa Harris added a first half penalty kick to give us the 2-1 lead in the first half.”

In the second half, senior Sophie Demurjian added two goals, sophomores Juliana Rafaniello and Caroline O’Connor each scored a goal. That 6-1 win was the second for the Caseys in the B North so far this season.

“Unfortunately after a couple of questionable calls, RBC capitalized on a penalty kick and free kick. The momentum switched to their favor and we were unable to regain control,” added Wegelin. “Overall, I feel like we have a lot of talent and will continue to give teams in our conference a challenge.”

Working the ball for Red Bank Catholic is Daniella Caputo (9), a senior midfielder, while Yuririan Santiago-Reyes (13) a junior at Long Branch plays defense.