Birdsall gets a hat-trick in 7-1 win

Tide is changing for Shore in loss to Seraphs 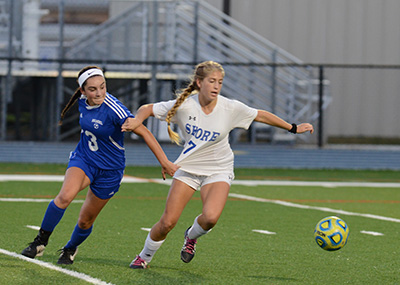 Running after a loose ball is Frankie McDonough (7) of Shore Regional who had 1 goal and 2 assists in the win over Holmdel.

Last Wednesday night the girls’ soccer team at Shore Regional hosted the Hornets of Holmdel in a Class A Central Shore Conference game.
It was a special week for the Blue Devils are they were ranked in the top ten of the conference and they honored their senior players.

“Our team did a great job possessing the ball and making the quick one touch and two touching passing which gave us many great opportunities to score and the girls did a great job finishing,” said George Moutis, head coach of the Blue Devils.

Shore had taken a 4-1 lead in the first half. It didn’t take Frankie McDonough long to get on the board. Less than a minute into the game she had the first goal off an assist from Hannah Birdsall. Holmdel tied the game at 13:13 with a goal by Francesca Peioro.

At 29:16 Kendal Rich of Shore scored the go-ahead goal off another Birdsall assist. The next two goals were both scored by Birdsal, the first was unassisted and the last of the first half was off an assist from McDonough.

Birdsall scored her hat-trick goal in the second half. It came at 41:59 off another McDonough assist. Shore was now up 5-1 and Birdsall had three of those goals. Number six was scored by Gracie Brignola off a Julia Eichenbaum assist. The last goal of the game was kicked in by Eichenbaum unassisted.

The Blue Devils had a 20-6 shot on goal advantage over the Hornets. Shore had two girls in the goal during the 7-1 victory. Julia Valinoti, the Sterns Trailer Athlete of the Week, had four saves. Meira Hegglin had one save for the Devils.

Lauren Mendillo (9) a sophomore midfielder at Shore Regional attempts to head the ball into the Holmdel goal.

Running after a loose ball is Frankie McDonough (7) of Shore Regional who had 1 goal and 2 assists in the win over Holmdel.