Lions take down the Wave 5-2

Tide is changing for Shore in loss to Seraphs 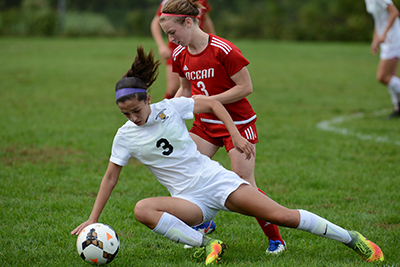 Scoring both goals in the 2-1 win over Ocean Township is Ranya Senhaji (3) member of the Monmouth Regional Class of 2020. So far this season she has seven goals and two assists.

On Saturday morning the girls of Monmouth Regional hosted the Spartans of Ocean Township in a Shore Conference Class B North soccer game.

Rob Curran, in his fourth season as the Spartans head coach, brought his team into Tinton Falls with a 4-6-1 overall record and was 4-5-1 in division action.

Ocean scored the only goal of the first half, kicked in by Sydney Maxwell off an assist by Lila Rice. Both squads had opportunities to score additional goals, but the ball would go just wide or over the bar.

The second half of action belonged to Monmouth Regional. Ranya Senhaji scored both of the Falcon goals  off an assists by Wendie Fisher and Courtney Hicks.

In the goal for the Falcons was Karley Trillhaase who made 20 saves in the victory, while Tyler Bartlett had 10 saves for the Spartans.

Lila Rice (4) a sophomore at Ocean Township assisted on the only Spartan goal in the 2-1 loss to Monmouth Regional.

Scoring both goals in the 2-1 win over Ocean Township is Ranya Senhaji (3) member of the Monmouth Regional Class of 2020. So far this season she has seven goals and two assists.