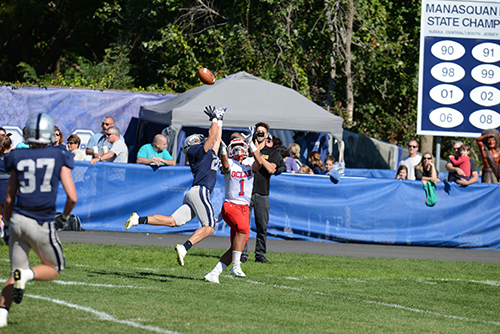 Ocean Township senior Joey Aldarelli is about to catch one of his game high 11 passes for 114 yards in the 28-14 loss to Manasquan.

It was a beautiful Saturday afternoon in Manasquan where the Warriors hosted and beat the Spartans 28-14 in a Shore Conference B North divisional football game.

Manasquan has been known to have one of the worst natural grass football fields, something its former late head coach Vic Kubu loves. According to the members of the Ocean staff the field was a dust bowl and that played into Manasquan’s strength; running up the middle and the conditions slowed down opponents.

Well, the grass this season was almost as nice as turf, and the Warriors went back to the game plan that won the school a Shore Conference record, of 11 NJSIAA state titles. They pounded the ball at the Spartans and then had a swarming defense keeping the ball in front of them.

“Manasquan is a big team and they have some horses,” said Don Klein, head coach of the Spartans, before kickoff. “We had a great off week and good practice, but we have to see how that translates on the field.”

Ocean hit the score board first in the first quarter. It was a tremendous 17-yard run by Kenney Pickett, the senior quarterback, who has committed to Pitt. The extra point by Simon Lee was good and the Spartans were up quickly 7-0.

In the second quarter the Warriors came out and scored a touchdown on a 45-yard pass. That was half of their game-high 95 passing yards.

Pickett then came back and directed his offensive unit all the way to the Manasquan three-yard line. He then pounded the ball across for his second touchdown of the game. Lee was good and Ocean had a 14-7 lead.

After that touchdown the Spartans kicked an onside kick giving the Warriors great field position near midfield with only a minute to play in the first half. According to the coaching staff it was supposed to be a squib kick, but it didn’t turn out that way.

With 13 seconds to play in the first half the Warriors connected on a 24-yard pass play evening the score at 14 points each. And that’s how the first half ended.

The Warriors kept that momentum starting the third quarter as they came out and drove the ball to the Spartan one-yard line and then crossed in for the go-ahead touchdown. They were now up 21-14.

With 3:03 left in the third quarter Manasquan scored the last touchdown of the game on a 21-yard pass play. That gave the Warriors a 28-14 lead.

Pickett was picked off near the end of the third quarter giving the Warriors a first and goal at the Spartan seven-yard line. The very next play Manasquan fumbled the ball and was recovered by Ocean.

Ocean had only 65-rushing yards on 26 carries. In the air, Pickett was impressive completing 17 of 32 attempts for 189 yards and had the one interception. Tedesco lead all rushers with 41 yards and Joey Aldarelli had 11 catches getting 114 yards.

Manasquan ran the ball 43 times for 215 yards. In the air they completed 4 of 8 going 95 yards. They had two fumbles and lost both to Ocean. With the win Squan improved to 4-1 overall and 2-1 in the B North. They are currently fourth out of the seven teams.
Ocean Township slips to 2-4 overall and 0-4 in the division. They are currently in sixth place and will face and host Long Branch, who is 1-4 overall and also 0-4 in B North games on Friday night

Ocean Township senior Joey Aldarelli is about to catch one of his game high 11 passes for 114 yards in the 28-14 loss to Manasquan.