Pickett and Tedesco get three touchdowns each 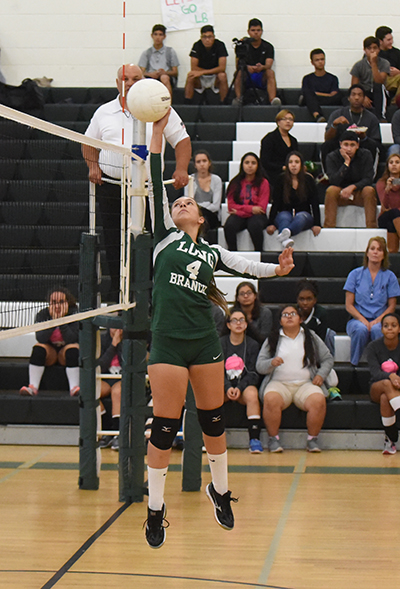 Progress is measured in small increments. In athletics everyone looks at the win-loss records to see how good or bad a team has performed.

Cari Rock has been coaching the girls volleyball team at Long Branch High School for the past ten years, and this season the Green Wave set a school record with seven wins. “I am extremely proud of these girls, they work hard, grew as a team, and played well together this season,” said Rock.

October 20, the season came to an end for the Wave as they hosted Lakewood High School and lost two heartbreaking games; 25-20 and 25-19. Before the game started, Rock and her players paid honor to the seniors who would be playing their last game in a Wave uniform.

Quayniece Page, Jessenia Acevedo, Janiyah Gillard, Rhea Fryer, Naila Emini, and Tatiana Dos Santos were present gifts and heard other players talk about their individual impact on the team and players. It was also the Green Waves tribute to Breast Cancer Awareness Month as the girls wore t-shirts that said “Dig Pink” in reference to a volleyball term.

“Despite losing some players from last season, our key positions we were able to overcome this and keep moving forward,” added Rock.

Page and Emini are great setters, Acevedo has tremendous power in her hits and if she continues her volleyball career in college all she needs to work on is her vertical leap. Another big hitter with a soft touch was Fryer.

“We focused a lot on our defensive positing this season. We haven’t been the same team you have seen in the past, we put up points by serving well; we hit the ball, play smarter not harder and have been competitive in all our games.”

Every player on the team is strong at the serving line. In the two tough losses to Lakewood Gilliard, Acevedo and Emini were all dead-on. Besides setting a school record with seven wins, several of the lady Wave players had some outstanding personal season stats.

Perfect control and a perfect set is delivered by Long Branch High School senior Naila Emini (9) a setter for the Green Wave.