Six vie for three seats on Long Branch Board 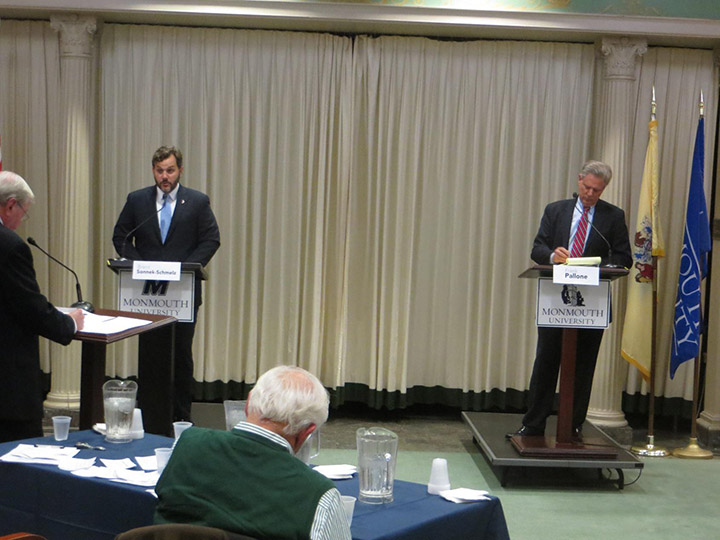 West Long Branch — Brent Sonnek-Schmelz had wanted to debate Frank Pallone for weeks. He got his wish Wednesday night, when he and Pallone (D), the incumbent Congressman for the 6th District of New Jersey, squared off in Wilson Auditorium at Monmouth University. The debate, moderated by Bill Madden, lasted 90 minutes and addressed some of the biggest issues facing American today, as well as what the two candidates would do to help fix them. Here are their takes on the issues: 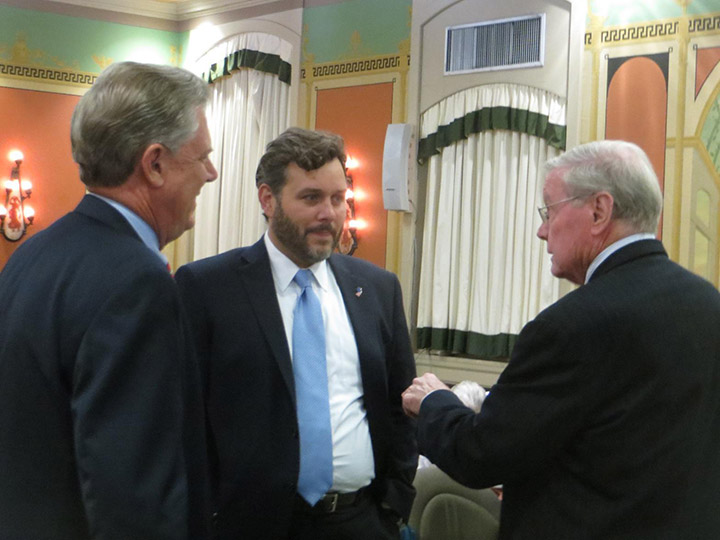 Pallone: He believes it has been a tremendous success, particularly in eliminating discriminatory practices, and allowing kids to stay on their parent’s health plan until they turn 26. He acknowledged there were some problems with premiums going up, but it was not a problem in New Jersey.

Sonnek-Schmelz: He liked that kids could stay on their parent’s plan, but stated that premiums in the district were going up a lot more than Pallone said, and that the ACA did not deal with the underlying problem of the increasing costs of health care itself. He also sharply criticized the “Cadillac Tax,” which, starting in 2018, will impose an annual 40% excise tax on plans with annual premiums exceeding $10,200 for individuals or $27,500 for a family.

Pallone- He stated that while he does believe in a strong national defense, he does not want the United States to get involved in another foreign war. If they do act in the Middle East, they should do so with the UN and NATO, and not on their own. In regards to immigration, he expressed his resentment of Donald Trump’s wall proposal, and said he trusted that refugees would be properly vetted.

Sonnek-Schmelz: He mentioned that Americans feel less safe than they did eight years ago in George W. Bush’s presidency, while proposing that the United States needs to declare war on ISIS. When talking about letting refugees in, he said that the vetting process must be able to determine that terrorists do not come over. He referred to a poll that showed 13 percent of Syrian refugees sympathized with ISIS.

Pallone: He stated that he did not believe that Social Security was doomed, dismissing it as a right-wing belief. In fact, he claimed that the economy improving since the Recession, as well as the Affordable Care Act, has helped extend the time that the US would start to run out of money for Social Security. He was in favor raising the cap on the payroll tax, but made clear he did not want to reduce benefits.

Sonnek-Schmelz: He disagreed with Pallone, pointing to bipartisan studies that showed that something was done now, there would have to be a 25 percent reduction in benefits. He supports gradually increasing the age of eligibility for Social Security, pointing out that 22 percent of Americans will soon be over 65.

Pallone: He did not want to tear down environmental regulations, and was against streamlining regulations. He believed the most important thing was for the federal government to invest more in education, and criticized the Republican Congress for not doing that. Currently, he is a supporter of Hillary Clinton’s plan to make tuition free for families with income up to $125,000. He is also an opponent of NAFTA, as he believes it will lead to a loss of jobs.

Sonnek-Schmelz: He stated that his primary focus was on main streets and small businesses, mentioning that more stores were empty than thriving. He is in favor of decreasing regulation, and bringing the corporate tax rate to 20 percent. To spark investment, he wants to provide a one-year investment window to newer businesses. While he did acknowledge that some environmental regulations were important, he believed that some of them were too costly and burdensome.

Sonnek-Schmelz: He is in favor of raising the minimum wage to $10 an hour, saying a mandatory $15 an hour would have a detrimental effect on small businesses.

Pallone: As well as pledging to continue his efforts to improve health care for veterans, he said his priorities are to pass a bill to deal with the opioid epidemic, a mental health bill, and a 21st Century Cures Bill that can help research diseases.

Sonnek-Schmelz: He said his priority is to focus on jobs, and help people who feel abandoned by the government. The main group of people he wanted to help were veterans, as he called Veteran Affairs a mess, and criticized Pallone for not taking a legislative position on the matter. He talked about the huge decline of veterans starting their own business.

Pallone: He stated that he wants to address climate change, and called out Republicans that did not believe it was real. He wants to encourage renewables, and put in provisions that will extend tax credits for renewable energy.

Sonnek-Schmelz: He believes that climate change is real, and wants to be the most progressive Republican on the environment. He believes Congress is making progress on the issues, and agreed with Pallone that there should not be drilling off the Atlantic Coast.

Pallone: He said people must vote, as the issues are very important to people’s lives. He wants to expand opportunities, such as more early voting and mail-in ballots, and criticized Chris Christie for vetoing a bill that would have allowed more early voting. Against voter ID restrictions, he also believes that people should be able to vote on weekends, so they do not have to miss voting due to commuting on weekdays.

Sonnek-Schmelz: – He believes all people will the ability to vote should vote, and that believes civics education can teach kids how government works, which will help kids understand appreciate voting more. While he believes that it should be easier for people to register, he also wants to make sure that the records themselves are correct, and that people are not able to vote in more than one district.

Pallone: He prided himself on working hard on beach replenishment, calling it a huge economic boost for the Shore, which will help tourism. He did criticize FEMA and the flood insurance program, and acknowledged that thousands of people have not gotten money yet. He did say, however, that he was trying to come up with remedies.

Sonnek-Schmelz: He called FEMA corrupt, and talked about the tens of thousands of people that are still out of their homes, referring to Pallone as “out of touch” on Hurricane Sandy. He wanted Pallone to call for the firing of the head of FEMA.

Sonnek-Schmelz: He said the tax code is filled with many pages that no one can read, and the only way to return money to people is to start over and make a new tax code. He stated the tax system has too many loopholes, pointing to Donald Trump allegedly avoiding paying income taxes as an example.

Pallone: He agreed with Brent on simplifying the tax code, and mentioned how large corporations are taking advantage of the loopholes. He wants corporations to pay more, and that simplifying it would make that happen. He wants to protect small businesses and the poor, and complimented Hillary Clinton’s Exit Tax on companies leaving the country, saying he supports it.

Pallone: He supports the three pillars of gun control that the Obama administration proposed, and mentioned the sit-in he participated in the House. He also said he wants to bring back the assault weapons ban, universal background checks so as to stop loopholes, and wants to limit the number of magazines to ten. He mentioned how Republican leadership in the house does not want to participate in that, and criticized Sonnek-Schmelz for not wanting a ban on assault weapons.

Sonnek-Schmelz: He supports the 2nd Amendment, believing it an individual right. He does not want to assume that gun owners are criminals, but agrees on closing loopholes, and does not want guns in the hands of criminals. Regarding the sit-in, he dismissed it as a fundraising opportunity, saying it was just something they did for fun. He does not support the assault weapons ban, believing it will not solve the problems, but does support the No Fly/ No Buy list, as long as there is due process.

Sonnek-Schmelz: He called it an absolute failure, saying he does not believe Iran will stop making nuclear weapons, and dismissed it as hope. He wants the US to be much stricter with Iran, and called Iran a threat to the American way of life. He also said the Iran Nuclear Deal makes America look less capable as a world power, and that the Jewish community was terrified.

Pallone: He believes diplomacy will postpone Iran from building a nuclear weapon for at least 10 years, if not longer. Although he does not acknowledge Iran as a friend, he does not want to go to war, and criticized Republicans and some Democrats for wanting to jump in a war. He said a majority of the Jewish community supported the agreement.

Pallone: He is a strong supporter of Hillary Clinton, and has even campaigned with her. He complimented her experience, and criticized Sonnek-Schmelz for not stating who he was going to vote for in the election.

Sonnek-Schmelz: He has not given a definitive response on who he is going to vote for, saying he is more focused on running against Frank Pallone than Hillary Clinton and Donald Trump.