23rd Running of Trick or Trot 5K was a windy, sunny Sunday 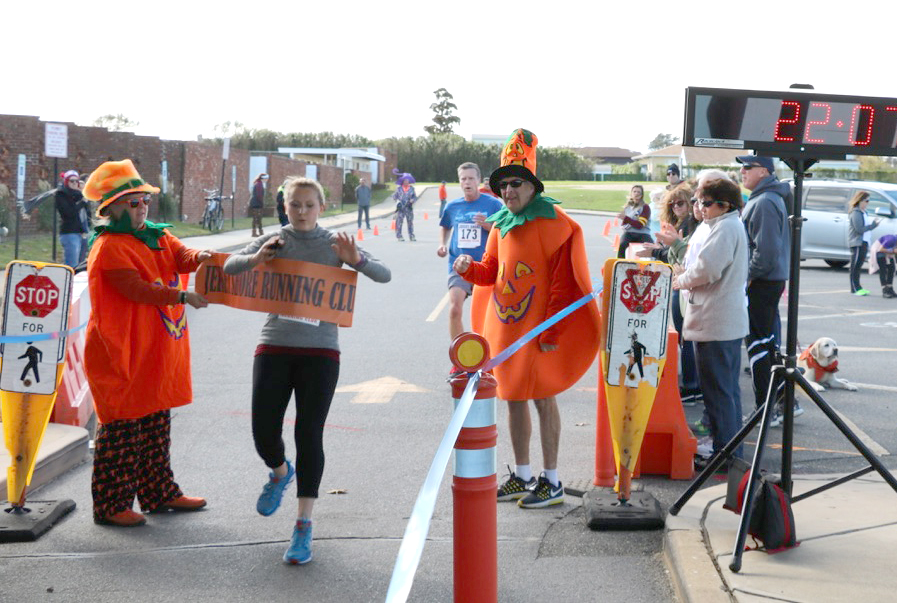 By Penny Hinck
and Jim Robbins
Long Branch — The Irish, according to encyclopedia information, brought the end-of-summer season activities of Halloween to America in the 1840’s and the custom that causes our children to say “trick or treat” has its origin much earlier in ninth-century Europe. But it was just 23 years ago that the Jersey Shore Running Club (JSRC), with a play on words of that popular phrase, brought us its annual Trick or Trot Race (now a 5K distance, previously it was 4 miles) and was presented, along with the Deal Fire Company, at the Deal Casino on the sunny/windy, but good-racing-weather Sunday morning of October 23.

Proceeds from the event will benefit the homeless animals at the Monmouth County Society for the Prevention of Cruelty to Animals (SPCA) and the Deal Fire Company. Over the past 22 years, the Trick or Trot has attracted nearly 50,000 participants and raised more than $25,000 for its beneficiaries. This fun-filled day, formerly held in Long Branch, found its new home in Deal last year.

Bryan Morgan, 32, of Oakhurst, was first into the finish-line chute, set up by Elite Racing Systems, of the total 175 competitors and caused the digital clock to display 19:02 (19 minutes and 2 seconds). Today’s runner-up came in 37 seconds after Morgan: Seng Goh, 42, of Ocean, was second-place finisher at 19:39 and third-place male finisher was West Long Branch’s Ryan Loehr, 16, at 19:41.

First place for the women, from this figure-eight course, that loops north for about a mile, returning to pass the start/finish area, and then meanders through the borough’s shady streets for the additional two miles, went to Angela Ciroalo, 24, of Long Branch at 22:07 (10th overall).   Second and third women’s honors went to Kimberly Ging, 22, Long Branch, at 23:37 (16th overall) and Heather Wanner, 41, Allenhurst, at 24:25 (23rd overall).

Septuagenarian friends of this octogenarian writer, Joe Renzella, 75, of Neptune City, who only days before celebrated this milestone birthday and Marilyn Ryder, also 75, of Eatontown were content with their racing times of 31:49 and 31:28, respectively, knowing that the aging process will slow you down. Both won were age group categories and were proud to have supported this event.

Other 70-year-olds competing were Raymond Robertson, 23, of Ocean at 34:38, and Red Bank’s Thomas Walsh, 70, at 37:22. Octogenarian Olie Nelson, 80, of Farmingdale finished in an impressive 30:32 to win the 80 and over category award.
“I just love this race!” exclaimed Long Branch’s Nancy Thorne, who has run the Trick or Trot in past years, but volunteered instead this year at the kids’ races held just prior to the main event. “I do miss the Long Branch course” she added, referring to the race’s previous location at Seven President’s Park and the Long Branch Promenade, “It was like so many races we’re lucky to have with the ocean as our beautiful scenery; and some of them have lakes to go along with the ocean,” she added. Thorne is referring to the summer events such as the oceanfront Spring Lake Five Mile Run which includes Lake Como; the Belmar Five Mile Run which also includes that same lake and Silver Lake too; the Avon 5K which has Sylvan Lake; the Bradley Beach 5K also has that same lake and Fletcher Lake to boot.

When Thorne is not running these highly picturesque ocean/lake races she will be directing the annual memorial Michael Thorne Scholarship Run in West Long Branch, a rare 4 miler, which, in contrast to this race, meanders through the well-paved, well-policed streets among manicured lawns during the third Sunday in May and honors the memory of her fireman brother who was killed while on duty.

“Because of Hurricane Sandy, we cancelled this in 2012,” said Long Branch Mayor Adam Schneider at the 2013 race, who at that time was very satisfied with his racing time of 29:13, on the Long Branch course. “But we (Long Branch) bounced back… I’m proud that we bounced back!” Schneider has since followed the Trick or Trot to its Deal location, running 31:22 in 2015 and finishing this year in 31:30.

At the 11 a.m. starting line, Phil Hinck, race starter, informed the awaiting runners of necessary details concerning the course, including the one water spot that would service the racers twice, and that they should make use of it. Here also David DeMonico, champion runner but not competing, would be playing motivational music on his trumpet for the competitors. Hinck then introduced Ranney School 7th grader Maya Jacoby, Long Branch, who gave a fine rendition of our National Anthem. He then shouted a loud “Ready, Go!” and the racers were off.
Mike Procopio, race director for the Trick or Trot, emailed post-race that he “was very pleased with the results of the day and grateful for all of the support that was provided for the different events. These included a 5K race, a pet walk, kids’ races and costume parades for adults, kids & pets. Many volunteers included groups from the Monmouth County SPCA, the Jersey Shore Running Club and the Deal Fire Department.”

Following the kids’ races, 5k run and pet walk, an awards’ ceremony was held, where fourth-year Director Procopio, assisted by past-director Jack Cheer, awarded candy-filled custom pint glasses to the swiftest costumed runners and to those wearing the best-judged costumes in the costume parade.

Other leading finishers of the JSRC Deal Trick or Trot 5K (3.1 miles):

Complete results for the JSRC Deal Trick or Trot are posted at https://register.jsrc.org/results .
Road racing events continue and schedules can be found on www.jsrc.org and  HYPERLINK “http://www.farcnj.com/”www.farcnj.com.