Eichenbaum and Hauritz kick Shore into the record books

Athelete of the week 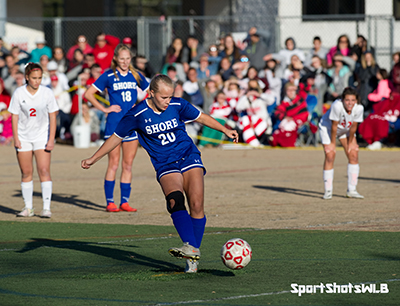 Scoring one of the two goals in the NJSIAA Central Jersey Group 1 sectional final for Shore Regional was Sophie Hauritz (20) a junior midfielder.

By Walter J. O’Neill, Jr,  photos by SportshotsWLB
November 11, 2016 the girls soccer team at Shore Regional High School accomplished something no other team in their school’s history ever have. They won their fifth consecutive NJSIAA Central Jersey Group 1 sectional title.

The 2016 tournament had the Blue Devils going in as the fourth seed. Unlike the past four years Metuchen was not their opponent in the finals. This year Shore faced third seed

Hadden took a 1-0 lead during the first half. During the second half of action the Blue Devils scored two goals.

Freshman Julia Eichenbaum and junior Sophie Hauritz each had goals. Sophomore forward Hannah Birdsall had one assist for the Devils in the victory.

In the goal for Shore was sophomore keeper Julia Valinoti, who had six saves. If you noticed the team is young, but did have six seniors; Claire Aikens, Kelly Bolsch, Devon McDonough, Lexi Ruggiero, Julia Sgro and Kayla Young all helped with four years of experience. In fact they have never had a season where they were not sectional champions.

• 2012 Shore entered the tournament as the second seed and beat top seed Metuchen 5-1.

• 2013 Shore entered the tournament as the third seed and beat top seed Metuchen in a shutout.

• 2014 Shore entered the tournament as the second seed and beat fourth seed Metuchen 3-0.

• 2015 Shore entered the tournament as the top seed and beat second seed Metuchen 4-0.

The opening round this year the Blue Devils beat 13 seed Middlesex 5-0. That was followed by a 4-2 quarterfinal victory over fifth seed Point Beach. In the semifinals Shore faced top seed Highland Park and played their best game of the tournament winning 7-1.

Metuchen received the second seed this year. They lost 3-2 to the seventh seed Palmyra in the quarterfinals.

Shore will now play Haddon Heights in the semifinals of the NJSIAA Group 1 tournament. The other semifinal game has Park Ridge facing Glen Ridge. The championship game will be on November 19, at Kean University.

Going up for the ball is Shore Regional’s Julie Sgro, a freshman forward.

Scoring one of the two goals in the NJSIAA Central Jersey Group 1 sectional final for Shore Regional was Sophie Hauritz (20) a junior midfielder.