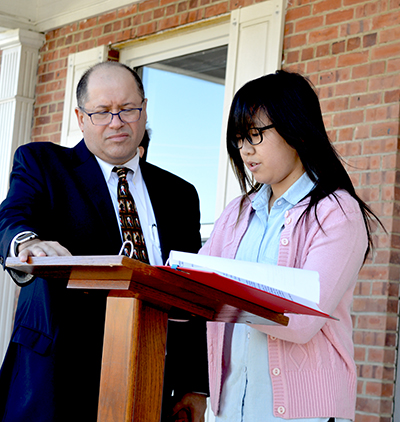 By Patty Booth O’Neill
“There’s background noise, it’s a little windy, and the flag is flapping in the wind. That’s how it should be,” said special guest speaker Lt. Colonel (retired) John E. Occhipinti. He had served in the military for over 22 years, enlisting in 1981, some of those years at Fort Monmouth.
Because of background noise, a lot could not be heard, but it didn’t matter. Everyone present either was a Veteran, knew a Veteran or would someday be a Veteran. They already knew in their hearts what was being said and celebrated.
The ceremony began with prayers led by Borough Chaplin Stacie Deerin and then America was performed by Borough Clerk Genie Smith.

Councilman John Patti with Councilmen Joe Irace and Richard Gallo by his side did a great job presiding over the event. “Mayor Jay Coffey could not be present as he is out of the country right now,” Patti explained, then read a letter from the mayor. He also introduced Oceanport resident and World War II Veteran Pete Bova, who spoke about his experience and those of his brother Joseph, who had been a prisoner of war for two years.

Patti then introduced students from Maple Place School, who read their essays on what Veteran’s Day meant to them. The winning essays were written by Nick Bennett, 5th grade; Frankie Salamone, 6th; Amelie Huang, 7th and Brenna O’Brien, 8th grade.

Lieutenant Occhipinti told the crowd that patriotism is not just serving your country in the military. “My heros have always been my soldiers. What makes this country safe are our Vets,” he said. “But you don’t have to be in the military. Everything you do is what keeps this the great country it is.”