Russo gets hat trick and 232 yards 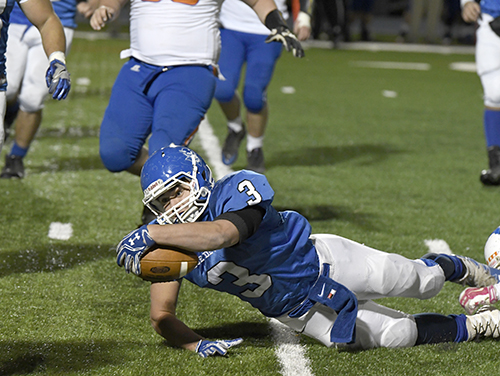 Mark Russo (3) of Shore Regional dives for extra yards during the win over Keansburg. He finished the game with 232 yards and three touchdowns.

Of the eight teams in that bracket, five are from the Shore Conference Class B Central division of the Shore Conference. Two of those teams had beaten the Blue Devils during the regular season, however Shore received the top seed based on strength of schedule.

Opening round the Blue Devils hosted the eight seed Titans of Keansburg, with the Devils winning 50-21.

Shore head coach Mark Costantino said that part of his game plan was to make the first quarter as difficult for his opponents as possible. The weather on Friday night also played an impact in the game. It was 46 degrees with a 20-mph wind.
On the third play of the game the center for Keansburg snapped the ball over the head of the quarterback who was in a shotgun formation for a 30-yard loss. They were forced to punt from the Devils 10-yard line.

The first offensive play of the game for Shore resulted in a 25-yard touchdown run by Josh Campi. The extra point by Gil Goldsmith was good and Shore had a fast 7-0 lead with 10:24 left to play in the quarter.

Keansburg had issues with three consecutive snaps, the ball sailing over the head of the quarterback. The Titans were forced to punt into that 20-mph wind and the result was the ball was blown backwards 10 yards.

On the Blue Devils second offensive play of the game resulted in a 40-yard touchdown run by Mark Russo, the first of his three that night. Shore was driving hard again when Quadir Lawson was hit by three Titans, who pulled the ball out of his hands and recovered on their own red zone. The first quarter ended with Shore up 14-0.
Starting the second quarter with a fourth and seven at the Shore 22-yard line, Keansburg completed the pass play for a touchdown cutting the lead to 14-7.

Shore drove all the way to Keansburg’s two-yard line, but Campi fumbled and the ball was recovered by Keansburg. On the next play the Blue Devils scored a safety after the Keansburg quarter committed an intentional grounding to avoid a sack. Shore was up 16-7 with 5:42 left in the half.

The Devils added another touchdown with 2:48 left in the first half. This time it was Lawson on a three-yard run.

Shore quarterback Matt Pennell connected on a 30-yard touchdown pass to Goldsmith with three seconds left in the first half. Going into the halftime Shore was up 31-7.
Russo opened the second half with a big touchdown run, finishing the night with 14 carries, 232 yards and three touchdowns. The Blue Devils scored often, seeming like every time they touched the ball it was a touchdown.

Pennell was 1 of 5 passing with 30 yards and the TD to Goldsmith. On the ground Lawson had 9 touches for 108 yards and Campi finished with 80 yards on 8 carries. According to Costantino the Devils ran 44 offensive plays gaining 482 yards. Goldsmith was 4 of 6 in extra points.

Russo finished with three touchdowns, Campi had two, Lawson and Goldsmith each had one. They were firing on all cylinders, but also turned the ball over four times in the victory, which is very unlike the Devils.

All four of the remaining teams in the bracket are from the Class A Central division of the Shore Conference. The Blue Devils will host Asbury Park, the fifth seed, on November 18, at 7:00 p.m. Asbury Park beat Shore14-7 to start the season.
The other semifinal game will feature two-seed Point Beach hosting third seed Keyport who beat Shore Regional two weeks ago.

Using a straight arm for the Blue Devils is Quadir Lawson (7) who had 108 rushing yards and one touchdown.

Mark Russo (3) of Shore Regional dives for extra yards during the win over Keansburg. He finished the game with 232 yards and three touchdowns.

Josh Campi (23) ran for two touchdowns and had 80 yards on the ground during the opening round of the NJSIAA Central Jersey Group 1 playoffs.