D was missing in Bishops win over Devils By Walter J. O’Neill, Jr 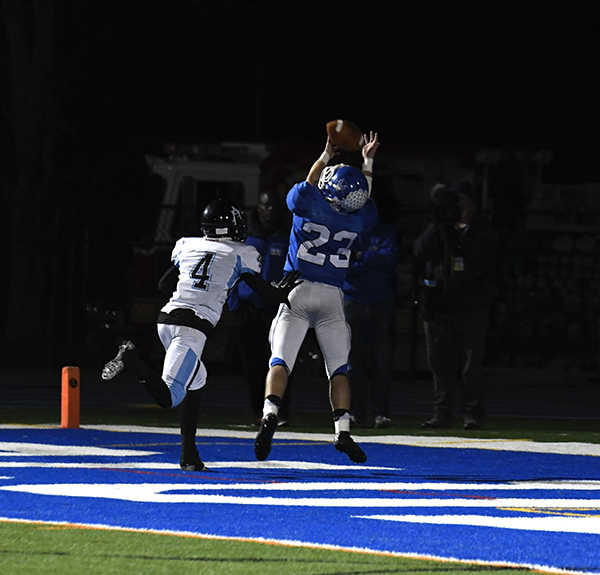 Walter O’Neill, Jr. LINK sports Making a perfect over the shoulder catch is Josh Campi (23) of Shore Regional for the first touchdown of the game against Asbury Park.

Friday night the Blue Devils of Shore Regional hosted the Blue Bishops of Asbury Park in the NJSIAA Central Jersey Group 1 semifinals. Asbury ran away with the 39-19 victory and will face Keyport in the sectional final.

Shore started the game red hot working the ball to the Asbury Park 23-yard line. That’s when Matt Pennell threw a great pass to Josh Campi who made an over the shoulder catch for the first touchdown of the game. They missed the extra point but had a quick 6-0 lead on the Bishops.

Asbury Park then had their turn and on their first possession scored on a 20-yard pass play. The Bishops attempted a two point conversion, it failed and the game was deadlocked at six.

On the very first play of the second quarter Asbury Park busted open for a 45-yard touchdown run and extra point and they were up 13-6 on the Devils.

Pennell then made a great pass to Gil Goldsmith, who was in full stride and made a great over-the shoulder catch for a 68-yard play, getting tackled at the Asbury 15-yard line. A few plays later Quadir Lawson ran in from seven yards out. Shore missed another extra point kick, down 13-12 to the Bishops.

On their next offensive series the Bishops connected on a 40-yard pass play and then had a first and goal at the Shore one-yard line. They punched it in and missed the extra point, but were up 19-12.

Just before the first half was over Shore had a fourth and nine at the Asbury 13. The Blue Devils attempted a field goal which was wide left. The half was over and Asbury Park was up 19-12.

In the third quarter the Blue Bishops fumbled the ball in their end zone and it was picked up by  Goldsmith for the Shore Touchdown. He kicked the extra point, and the game was even at 19.

Asbury Park then scored on a six-yard run, and missed the kick. They were up 25-19. The  Devils were driving and Matt Pennell threw a pass to Goldsmith who was under tight coverage. He and the Blue Bishop defender battled for the ball which ended up being intercepted. The Asbury player ran it back 85 yards for a touchdown.

In the fourth quarter, Shore fumbled the ball which Asbury Park picked up and ran 60 yards for the final touchdown.

With the loss the Blue Devils are now 6-4 overall and 2-3 in the division. They have one more game, they host Rumson-Fair Haven who is 8-2 on Thanksgiving eve.
The four teams in the semifinals of the Central Jersey Group 1 tournament are all divisional opponents in the Shore Conference Class A Central. Shore had three losses this season. On opening night they were beat by Asbury 14-7 and Keyport beat them 21-20. However, the Devils went into the state tournament as top seed based on strength of schedule. The other seminal game had Keyport beating Point Beach.

Shore and Asbury Park were missing defensive stops and discipline. There were 25 first downs in the game; with Shore having a 16-9 advantage. On the ground both teams combined for 82 rushes for 459 yards. In the air they went 11 of 23 with one interception for 213-passing yards. That was a combined 672 yards of offense. The two schools combined for seven punts, six fumbles and 11 penalties for 77 yards.

Getting in on a quick defensive rush is Paul Christopher (33) of Shore Regional who tackles an Asbury Park runner for a loss.

Walter O’Neill, Jr. LINK sports Making a perfect over the shoulder catch is Josh Campi (23) of Shore Regional for the first touchdown of the game against Asbury Park.