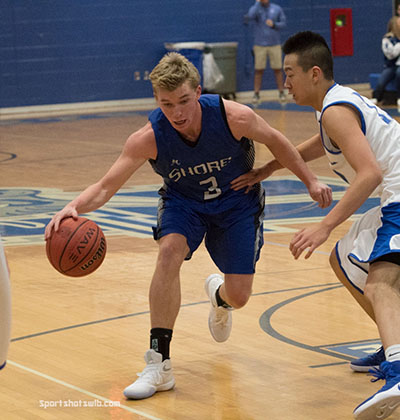 By Walter J. O’Neill, Jr, Photos by SportShotsWLB
Friday night the boys basketball at Shore Regional were on the road to start the season. They traveled to Holmdel where they faced the Hornets in a Shore Conference Class A Central divisional game.

It was back and forth all night, however the Hornets sneaked out the 47-39 victory over the Blue Devils. Frank Carmody is in his third season as the Shore Regional head coach and has a 27-27 record. Last year his Blue Devils finished 6-20 and is hoping for improvements this season.

The key newcomers on the Blue Devils roster are Kevin and Jack DuBois and Devin Chartier all juniors. Ryan Flanagan and Leo Montesinos are two sophomores called up to varsity.

Holmdel had a 10-8 lead after the first quarter and took a 21-16 lead into the halftime break. The third quarter was the worst offensively for Shore as they scored only six points. However, they held Holmdel to eight so going into the final quarter the Hornets were up 29-22.

The fourth quarter was the best of the game as both teams were on fire with Holmdel taking an 18-17 scoring edge and winning the game 47-39. Panduri was top man for the Devils with 14 points. Mannino and Koob each finished with nine points.