The Link News Athlete of the Week.

Ocean skates to victory over Steinert 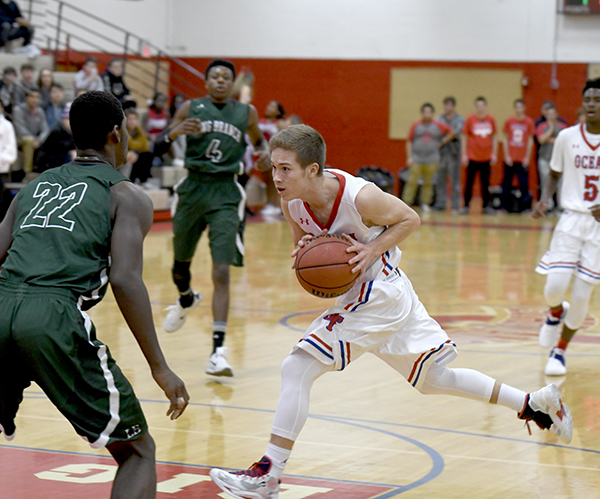 By Walter J. O’Neill, Jr
The boys’ basketball season just started and last Tuesday night in Ocean Township was one of the most exciting games in recent memory as the Spartans beat the Green Wave 58-57.

For most of the game the Spartans were in control as they outscored the visiting the Long Branch team 19-17, 15-8, and 16-9 in the first three quarters. However, the Green Wave was on fire in the fourth quarter as they only allowed Ocean eight points while they put 23 on the scoreboard.
With 1:19 left to play the Wave pulled within two points of Ocean, 55-53. Then with 37 seconds left to play Long Branch had a fast break and layup and even the score at 55. Ocean turned over the ball on the inbounds pass and Long Branch scored to take the lead for the first time in the game.

John Terlecsky, who is in his sixth season as head coach of the Spartans, called a timeout. The coach designed a play for Darius Brown who was red hot from the outside all night. When the game resumed Ocean had the ball in front of their bench and less than 10 seconds to play and down 57-55.

Brown inbounded the ball and made a pass to Andrew Seager at the top of the key. Brown then ran to the right side corner of the court. Seager started dribbling in the same direction, while Brown ran the baseline under the hoop. Jack Miller was running to the top of the key from the right corner when he was given the ball by Seager.
Miller took three dribbles and fired a cross court pass to Brown who just ran off a screen on the left side of the court and was outside the three-point arch. He took the pass and leaped straight up and let go a long jumper that went in with three seconds to play and gave Ocean the 58-57 lead.

Ocean fans and players went crazy yelling and cheering. Long Branch had one last opportunity and attempted a deep three that fell short.

Both teams play in the B North division of the Shore Conference. Currently the Wave is at 1-2, while the Spartans are 1-1. Leading the division at 2-1 are Manasquan, RBC, Wall and Middletown North. In last with no wins so far is Monmouth Regional.

Tyree Morris was the leading scorer for the Wave with 21 points, with 10 of those in the first quarter. Timothy Fosque finished with 14 points, six in the final quarter of action. Getting 10 points for Long Branch was Marc Dennis, who scored seven in the fourth quarter.

Ocean also had three players with double digits. Brown was high man with 19 points and the game winning three. Miller finished with 16 and Seager scored 11 points.