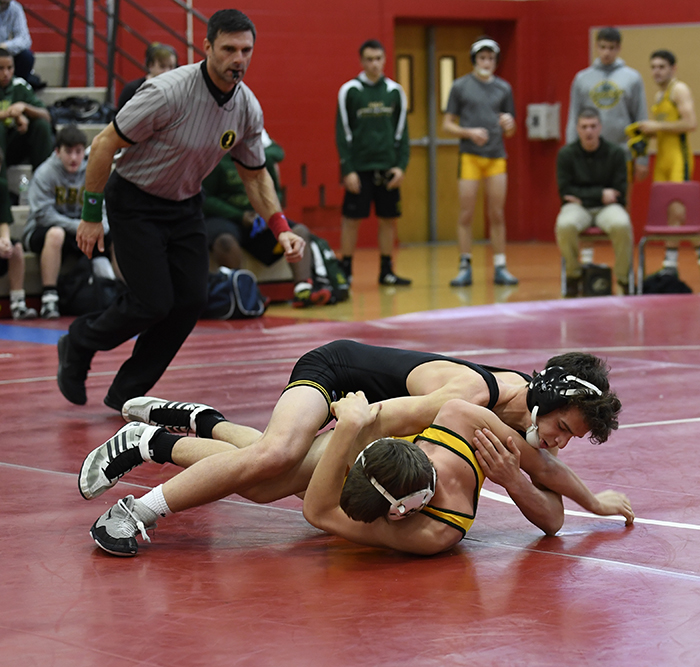 Monmouth Regional had a pin at 138 pounds when Tyler Flynn (top) put Leonard Meer of Red Bank Catholic on his back at 1:27

Ocean Township, Middletown South and RBC are all Class B North divisional opponents. The Falcons are in the Shore Conference A Central division. When Monmouth Regional faced host Ocean Township they won only one match, and that was at 285 pounds. Bradley Pietz scored a pin over Isaiah Moriniere at 1:43 of their match. The Falcons lost 77-6 to the Spartans.

An exciting match was when the Caseys and Falcons faced off, definitely the closest of the morning. Monmouth Regional won the first two matches with Luke Corso getting a pin on Mark Lurie at 0:51 at 120 pounds. Red Bank Catholic forfeited 126 pounds giving Brandon Warner a win.

The Caseys had their first win at 132 pounds when Thomas DiStefano scored a pin on Luis Gutierrez-Vera at five minutes of the 132-pound bout. Monmouth Regional came right back and had Tyler Flynn get a pin on Leonard Meer of RBC at 1:27 of the 138-pound bout.

Red Bank Catholic then went on a five-bout winning streak, four of those pins. The first was a Monmouth Regional forfeit at 145 pounds giving Ethan Byrne a win. The first Caseys pin came at 152 pounds by Jace Fanelli scored at 3:27 on Dylan Pham. The 160-pound match had Aiden Meyler-McAuliffe getting his at 3:05 over Victor Olimpio.

The next two pins were scored rather quickly. Steven Cmielewski at 170 pounds had his at 1:06 over Falcon Sergio Macias. The 182-pound match had John Columbia getting his pin at 32 seconds over Ryan Convery.

Red Bank Catholic had two back-to-back pins. Christian Pritzlaff put Isaiah Monirere of Monmouth Regional on his back at 1:35 of the 220-pound bout. That was followed by Michael Griggs at 285 pound getting a pin on Pietz at 2:27.

The last two matches went to Monmouth Regional. Shan Learn scored a pin on Nicholas Mullaney at 1:07 of the 106-pound bout. Devon Pham then defeated Andrew Lennert 5-3 at 113 pounds.

Jace Fanelli of Red Bank Catholic scored a pin over Dylan Pham of Monmouth Regional at 3:27 of the 152-pound match.

Jace Fanelli of Red Bank Catholic scored a pin over Dylan Pham of Monmouth Regional at 3:27 of the 152-pound match.

Monmouth Regional had a pin at 138 pounds when Tyler Flynn (top) put Leonard Meer of Red Bank Catholic on his back at 1:27