Serns Trailer is honored this week to recognize Al DeSantis 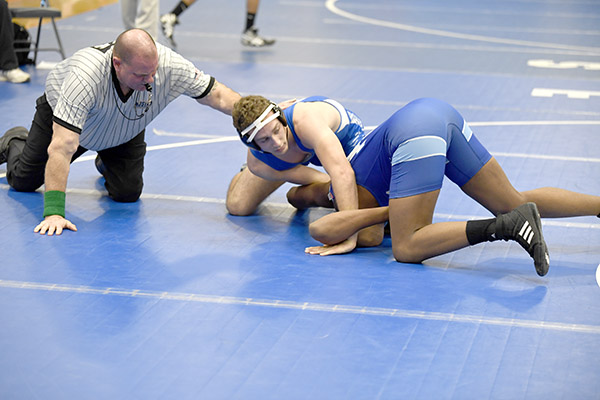 Saturday morning when everyone woke up and saw the snow they figured it was a good day to stay home and in bed. However, David Porta, head coach of the Shore Regional varsity wrestling team headed over to the high school as his squad was hosting Haddon Township, Newark Collegiate Charter and Bernards in a quad meet.

Those other schools were on the road since 5:30 in the morning so they expected competition and the Blue Devils didn’t disappoint them. “We are not the team we were last year, but by no means is that a bad thing,” said Porta. The Blue Devils graduated six seniors each with 23 wins or better last year. “Those six seniors had five district medals combined and led the team to a school record 22 wins last year.”

Shore started the morning off with a 39-36 win over Bernards. “This season is a year in breaking in a lot of new guys while unleashing some much improved and battled tested returners,” added Porta. He added that they beat Bernards because not one Devil got pinned. They had split the bouts 7-7 and would have lost the tie breaker criteria. But enough guys did their job to avoid giving up bonus points and that was the difference in the win.

Porta said that as a coaching staff they always make sure to game plan as thoroughly as possible for each match and put the team in the best position to win. Sometimes, he said, that means telling a wrestler he might lose his match, but his job is to save team points by not getting pinned. “And that is how we beat Bernards,” Porta said.

Up next for Shore was an easy 7-26 win over Newark Collegiate Charter, which forfeited seven matches. Klemser was the first Devil to face a female opponent from Newark. “That was the third time in my career that I had to wrestle a girl,” said Klemser. It only took him 30 seconds to pin April Vassell. “I just wanted to get it over as fast as possible. Once on the mat I don’t think of them as a girl. They are competing in a boys sports so I just wrestle like I would any opponent.”

Other Shore wrestlers who won were; Gabe Pesh at 126 pounds, Bassel Ibrahim at 132 pounds, Alexis Garcia Ortiz at 182 pounds, Michael Rosati at 195 pounds, and Patrick O’Dwyer at 220 pounds all with pins.

The last team they faced was Haddon Township. “We don’t match up well against them and they are very talented.” Shore lost that match 60-13.

Getting wins in the Haddon Township match were; Smuro with a pin at 120 pounds, DeSantis with a major 12-2 decision at 126 pounds, and Weir with a 4-2 win at 138 pounds. Haddon Township went on a nine-bout winning streak starting at 145 pounds.

Shore Regional is now 5-3 overall and 1-0 in their division of the Shore Conference. Sophomore Matt Klemser and junior Brad Smuro both had 20 wins last year and Brad was a district 23 medalist. “They have different styles as Klemser is hard-nosed and tough while Smuro is methodical and technical,” Porta said.

Also part of the returning Devils are Weir, Smolokoff and McCrae. All three of those wrestlers have put in tremendous amount of time and hard work which is needed to be successful this season. “Dean is one of our captains and one of my favorite wrestlers because he was a hallway guy we pulled in as a freshman,” said Porta. “He will never be at the level of a state or region caliber guy, he works as hard as possible and he is a shining example to others we can pull in from the hallway who also have no wrestling experience about what a little hard work can accomplish.” The coach also said that McCrae is the most athletic wrestler on the team and Weir is the most improved.

The top seniors for Shore are Cannon and Rosati. “Austin is healthy and motivated and has been unstoppable since he first arrived at Shore. He has such a through wrestling background. He is basically our third coach in the room,” Porta added. Rosati and Cannon are workout partners and they help each other improve.

Jarrett Weir (left) is the Shore Regional wrestler who had a 4-2 win over Ian Smith of Haddon Township at 138-pounds.